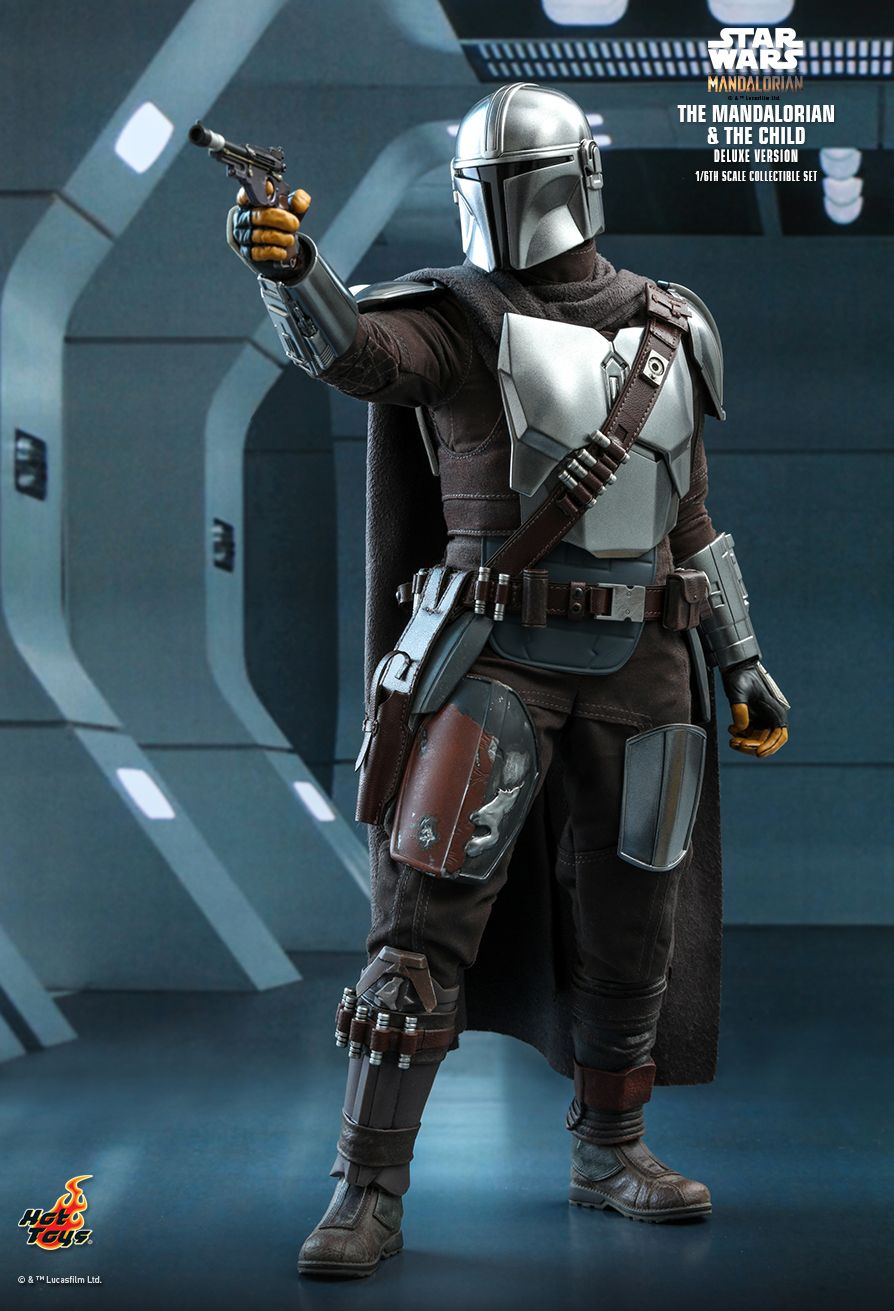 This new action figure of “The Mandalorian 2.0” recreates the silver armor shape from the later stage of the TV series. The entire action figure is 1/6 scale, approx. 30cm tall, and his body with over 30 points of articulations. 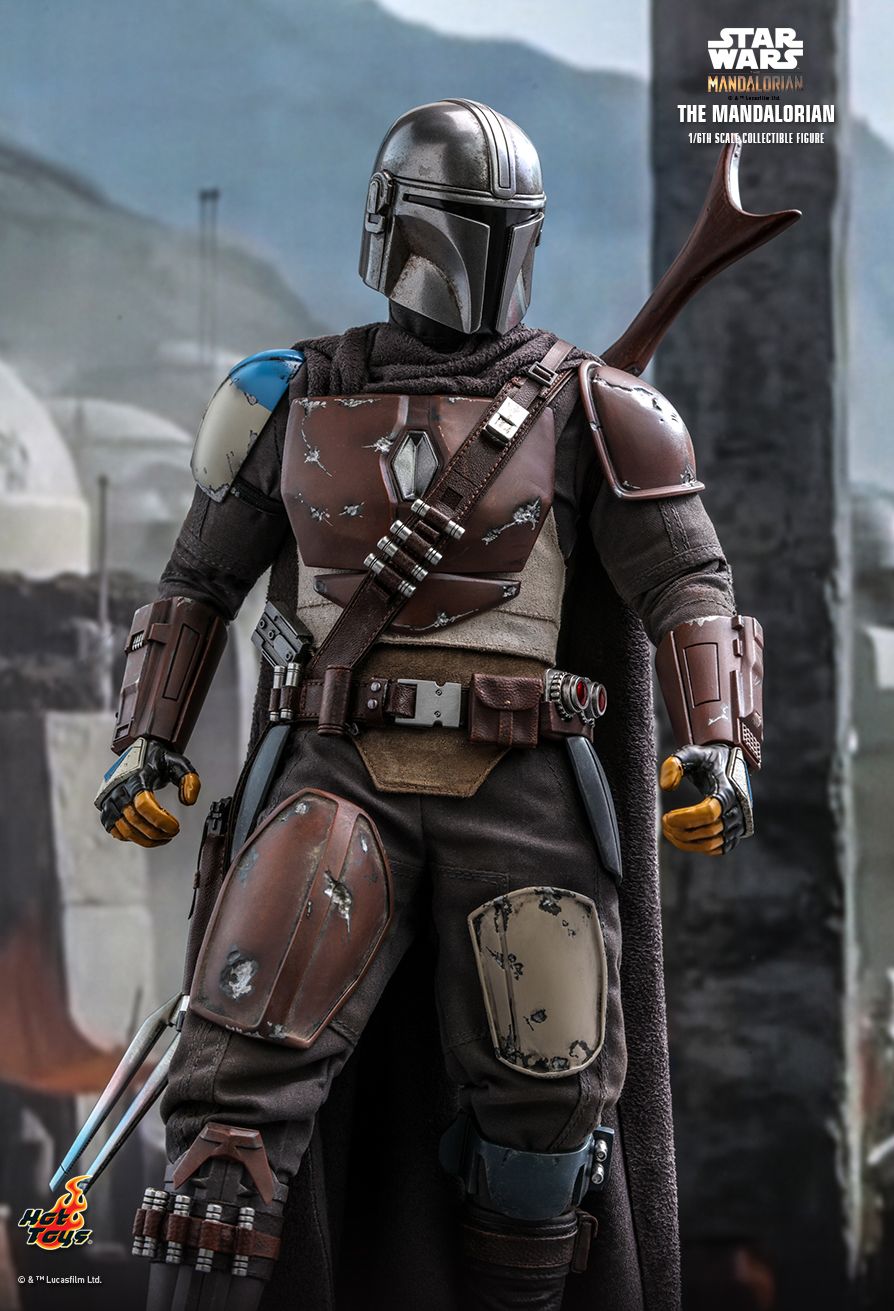 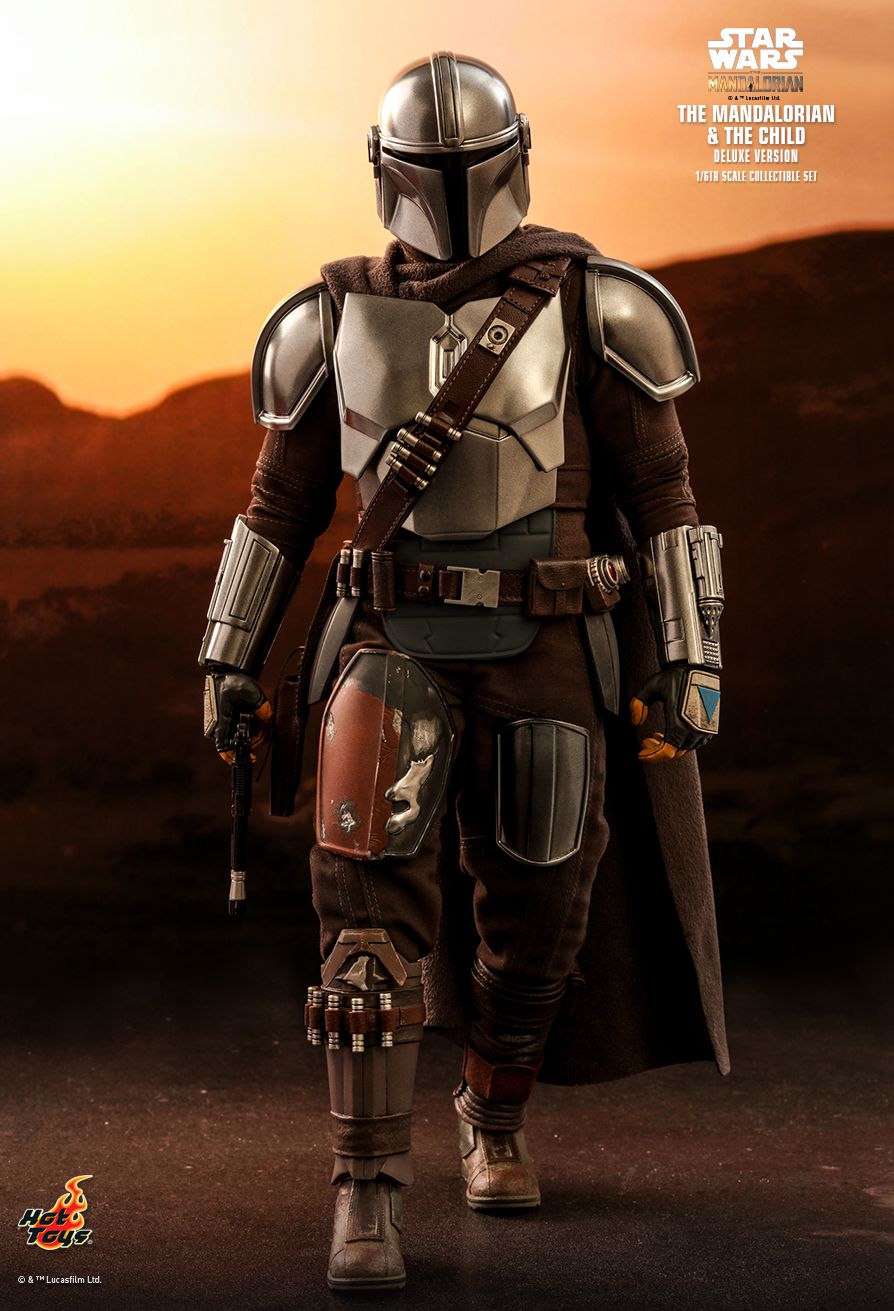 Compared with the “The Mandalorian1.0” launched earlier on the left, this new “The Mandalorian 2.0” uses armor made of beskar metal. Compared with 1.0, the helmet is updated and brighter, and the chest, shoulders, forearms and thighs are all replaced with beskar armor. 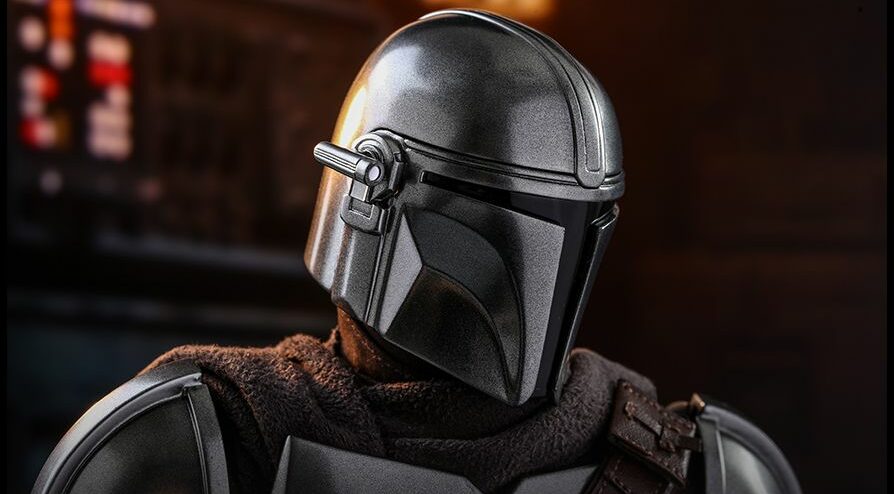 Hot Toys‘ beskar armor is made of a matte-like metal paint finish, the combination of metal armor and fabric has a sense of texture and layering, and it has a heavy feeling. 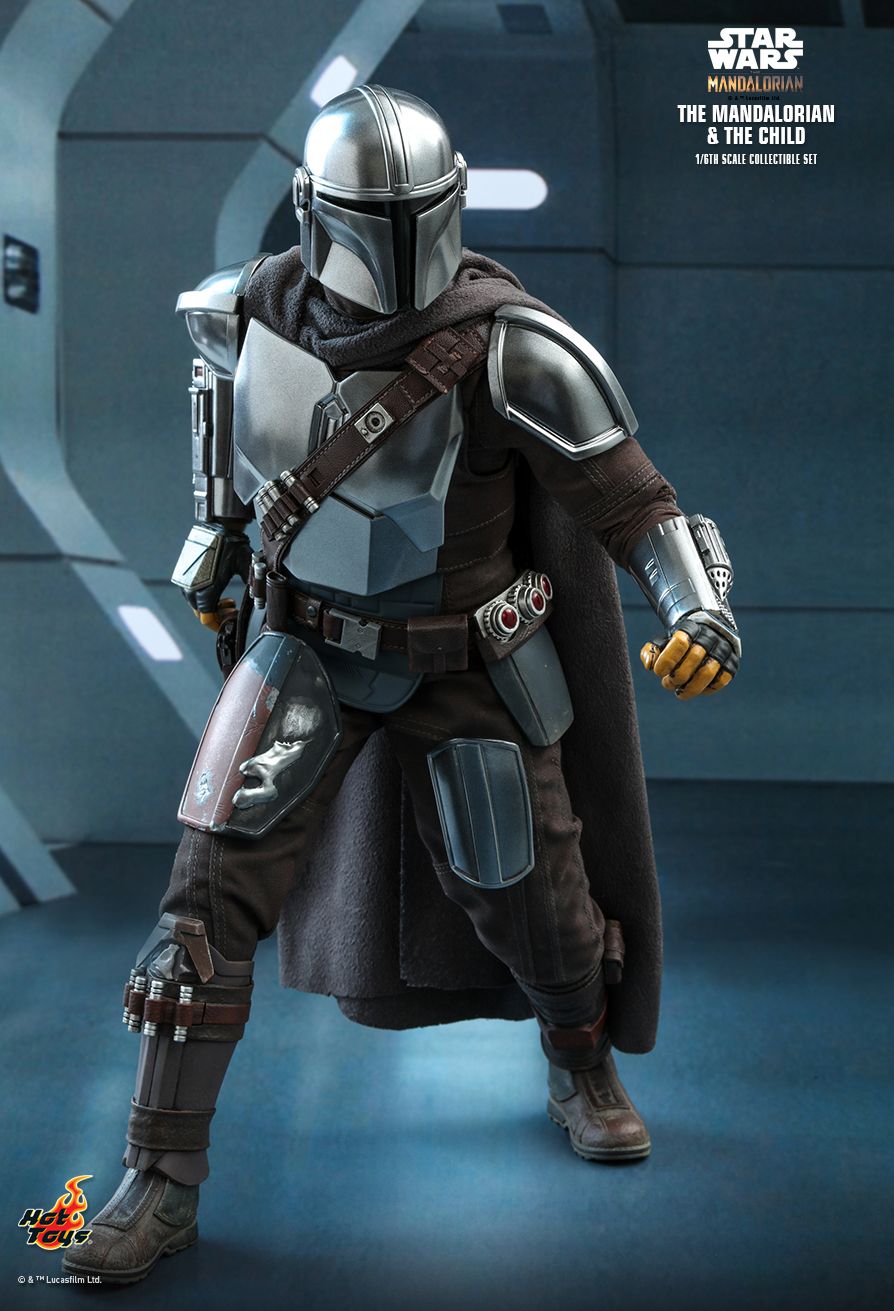 The armor of the right leg truly recreates the effects of war-damaged scratches. 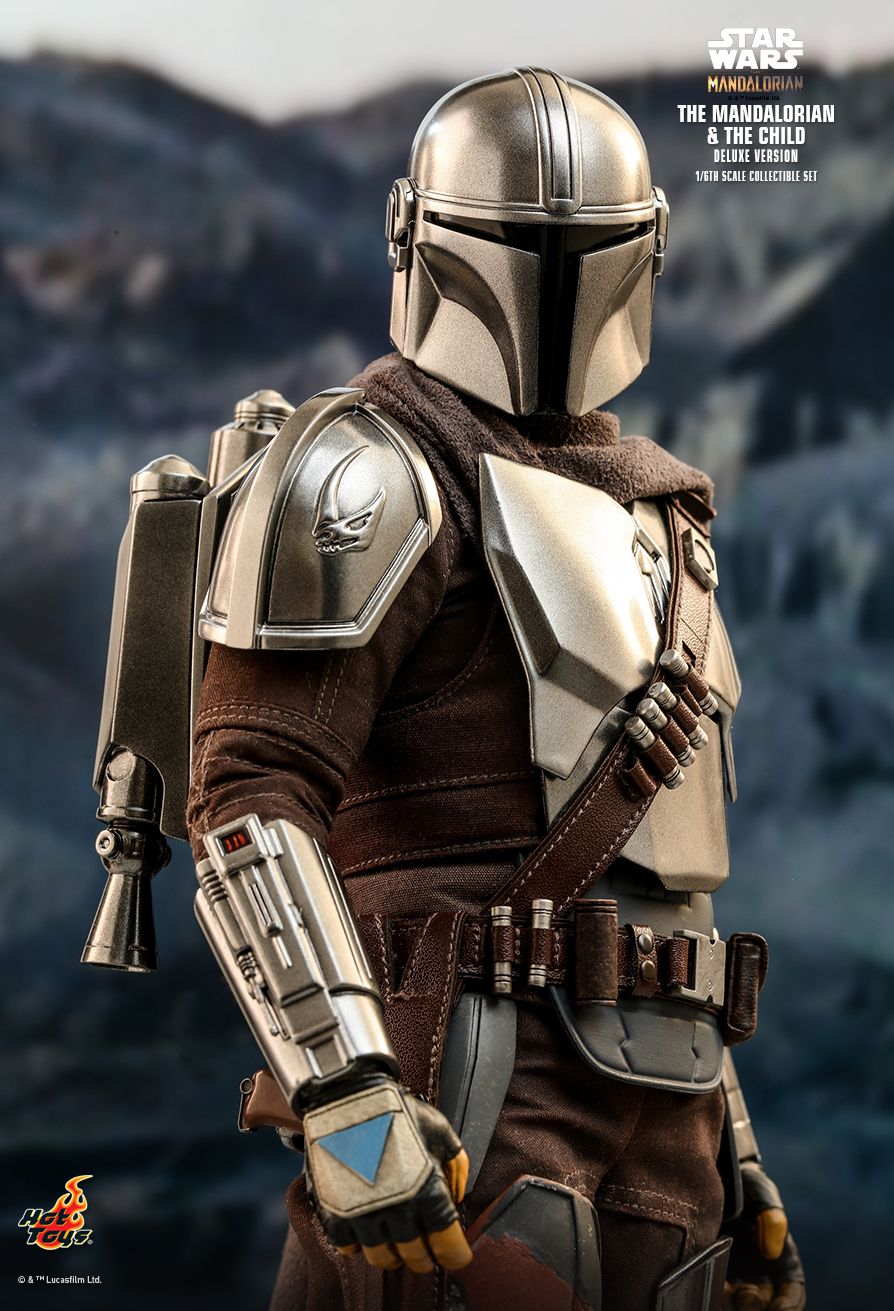 Look at the shoulder of the Mandalorian in the picture, this action figure also includes an interchangeable right shoulder armor with Mudhorn signet. 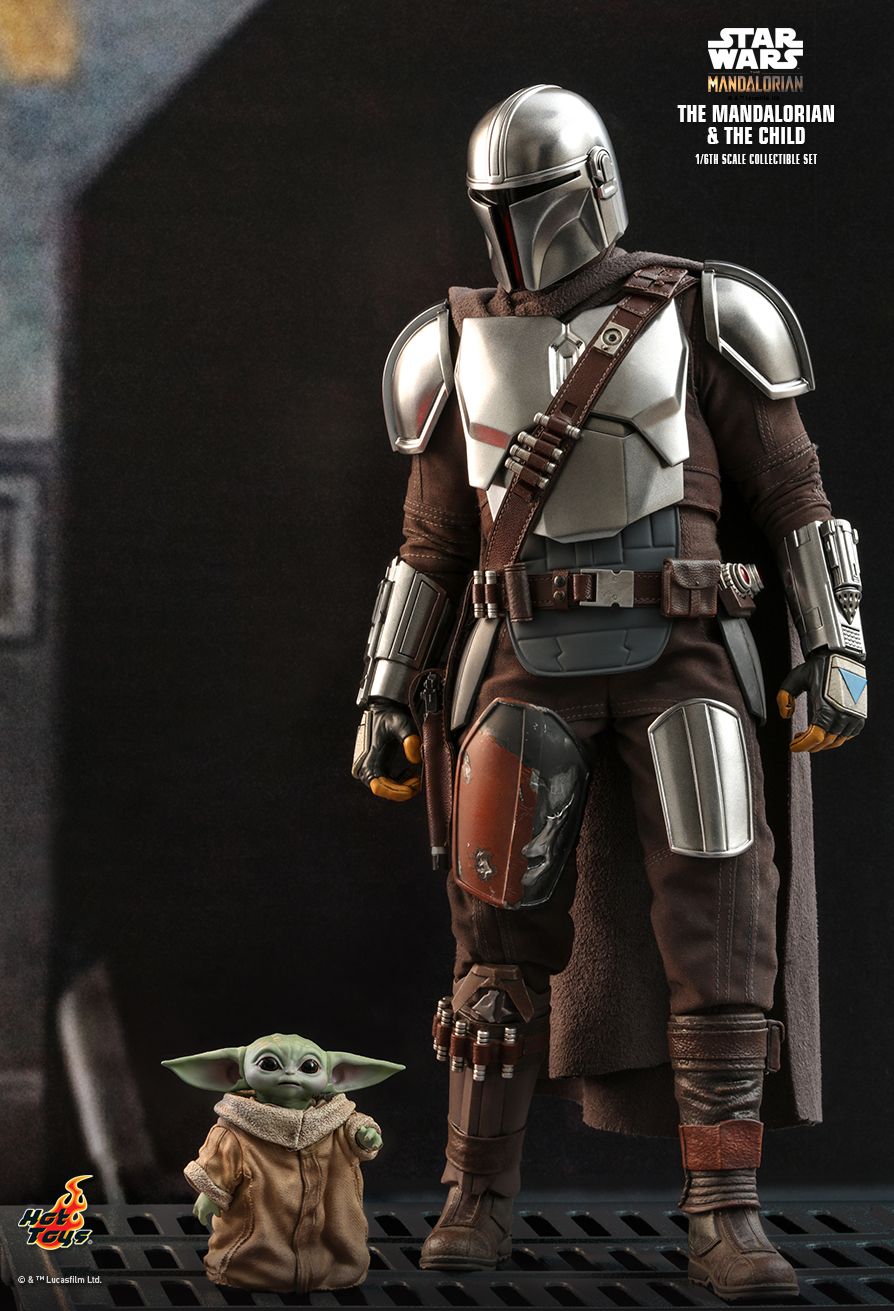 Because it is “The Mandalorian 2.0 and Baby Yoda” collectible set, so a Baby Yoda figure in standing posture is also included. 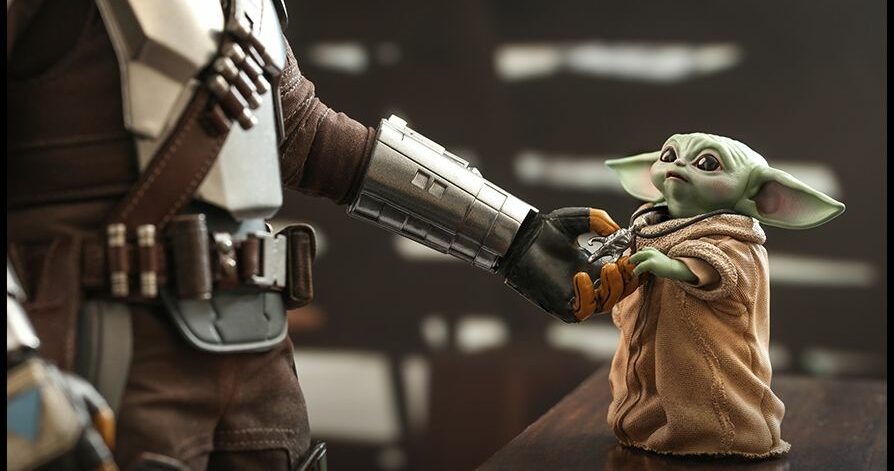 This Baby Yoda figure is 1/6 scale, only approx. 6cm tall. Features well his big watery eyes, cute hand gesture and the tan fabric coat as same as the image in TV series. 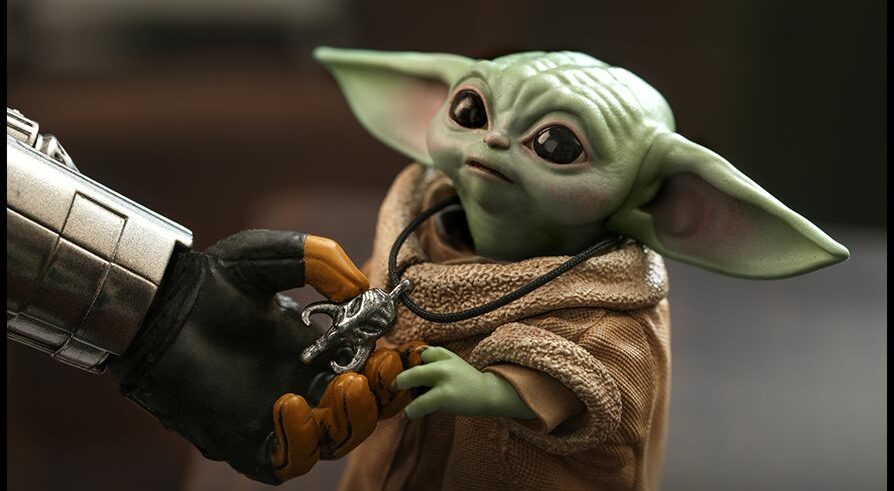 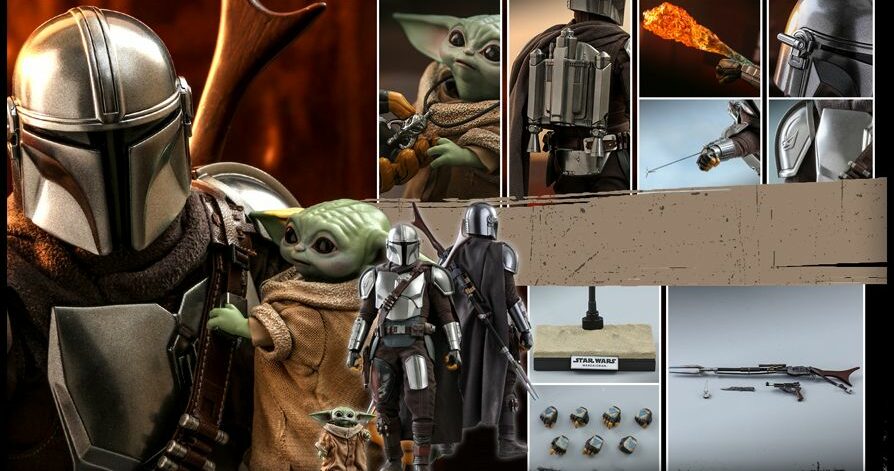 There are so many accessories included. In addition to the 7 pieces of interchangeable gloved hands and the specially designed dynamic figure stand with Star Wars logo and character nameplate, a lot weapons of “The Mandalorian”  are included this time. 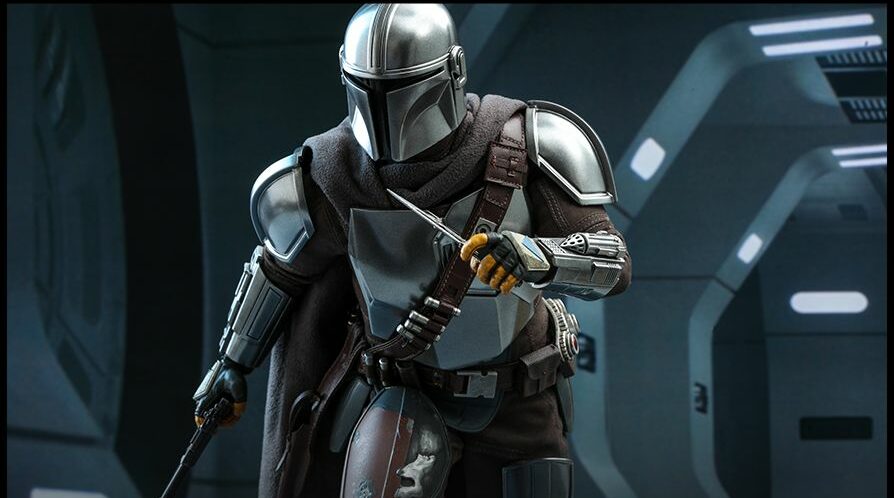 One  dagger and one blaster pistol are included. 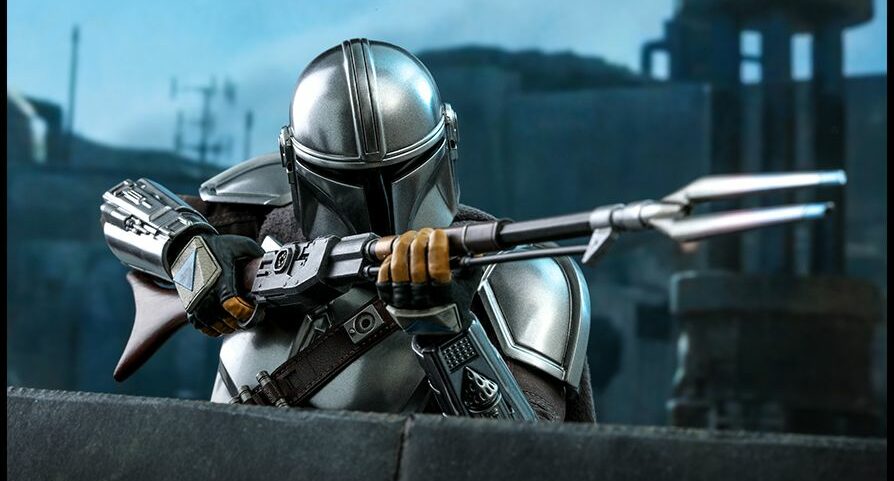 One blaster rifle with attachable scope is included. 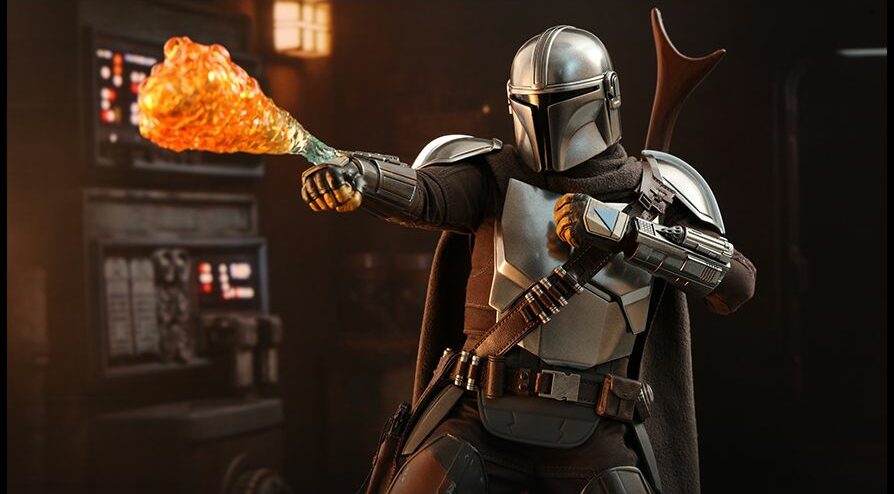 One flamethrower effect accessory can be attached to right forearm is included. 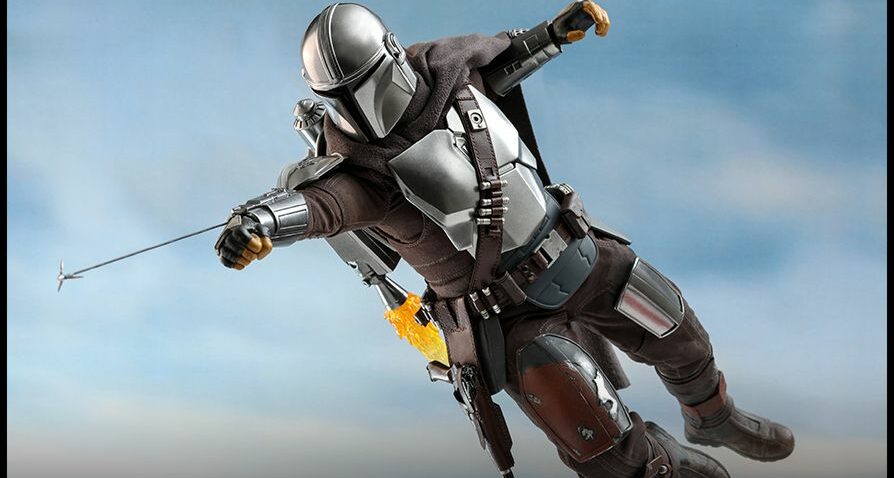 One wired grappling hook is included. 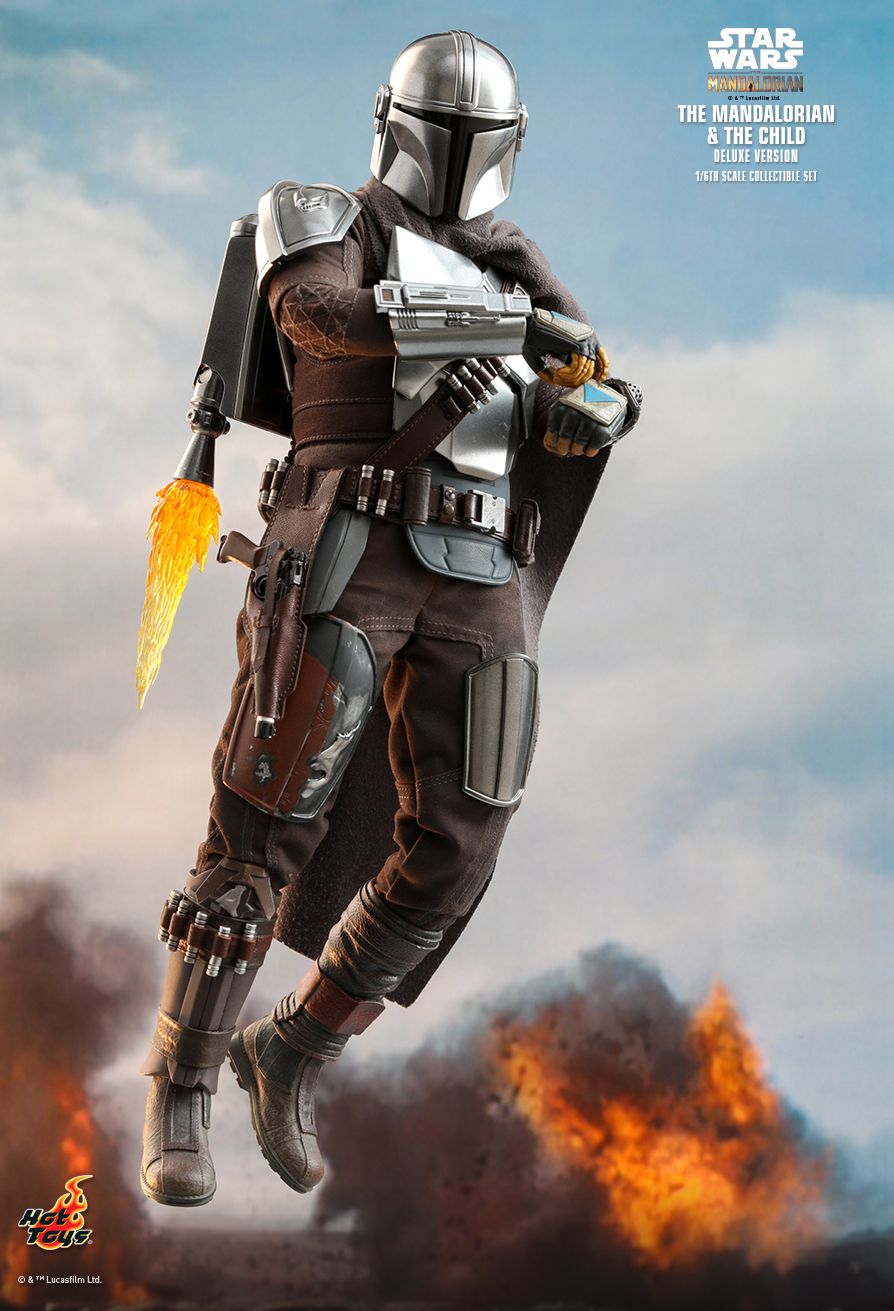 These rich accessories greatly increase the playability of this collectible set. 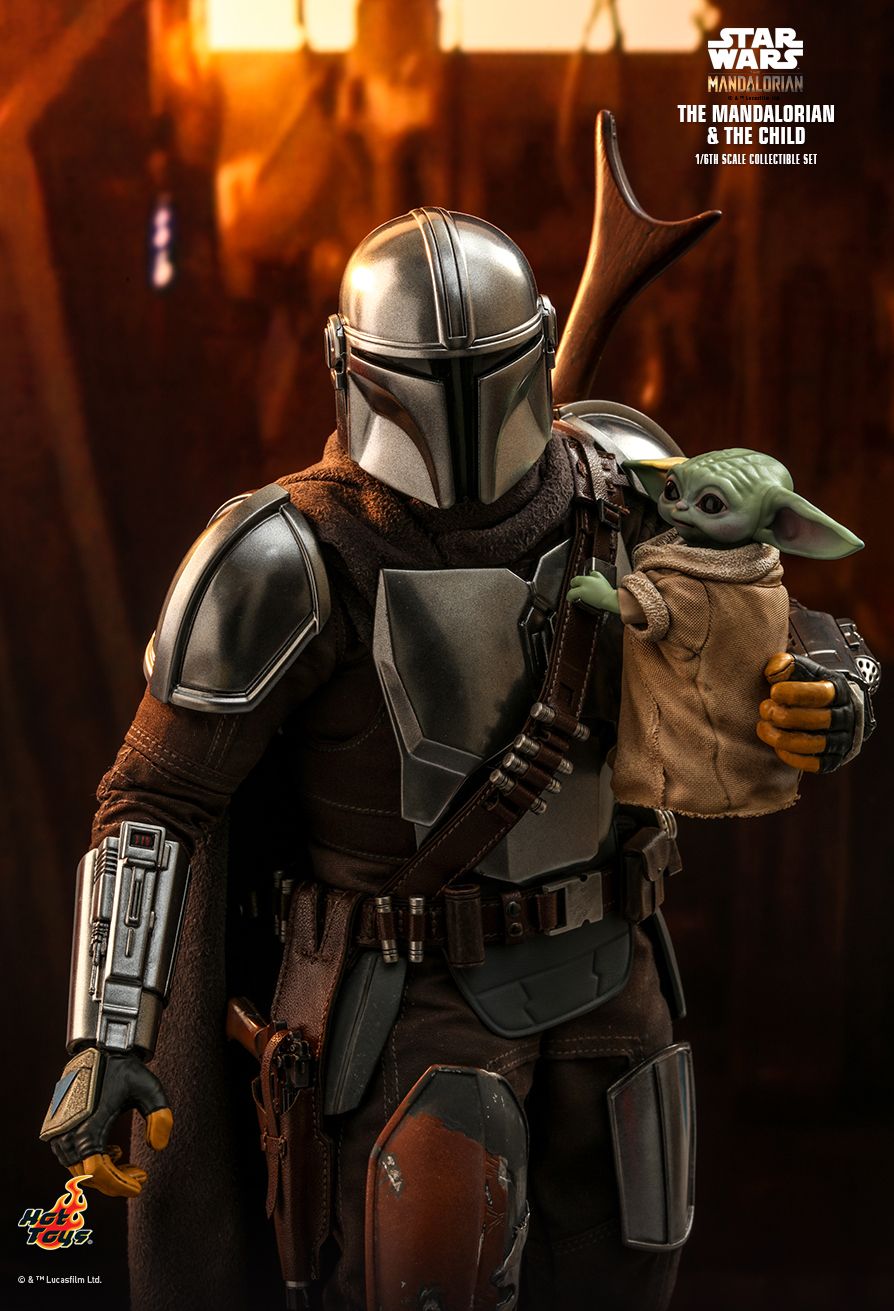 So lovely is the POSE of the Mandalorian holding Baby Yoda. 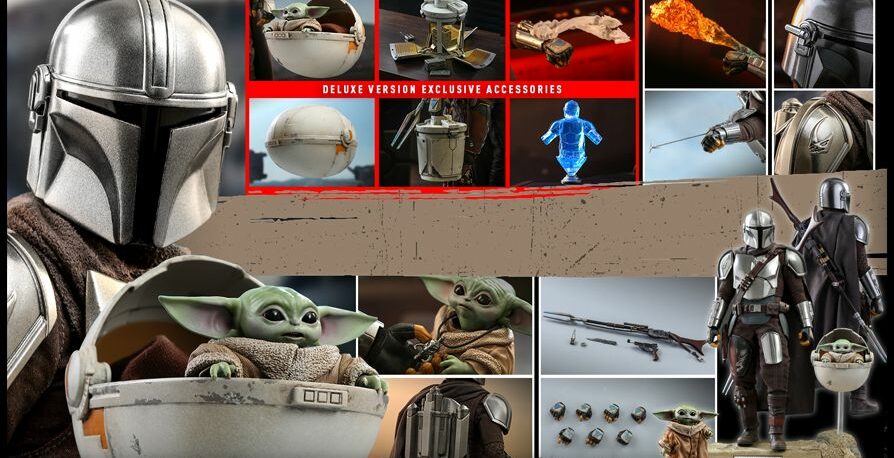 Compared with the normal version, the deluxe version is not only more accessories included, but also attached a Baby Yoda‘s small hover pram! 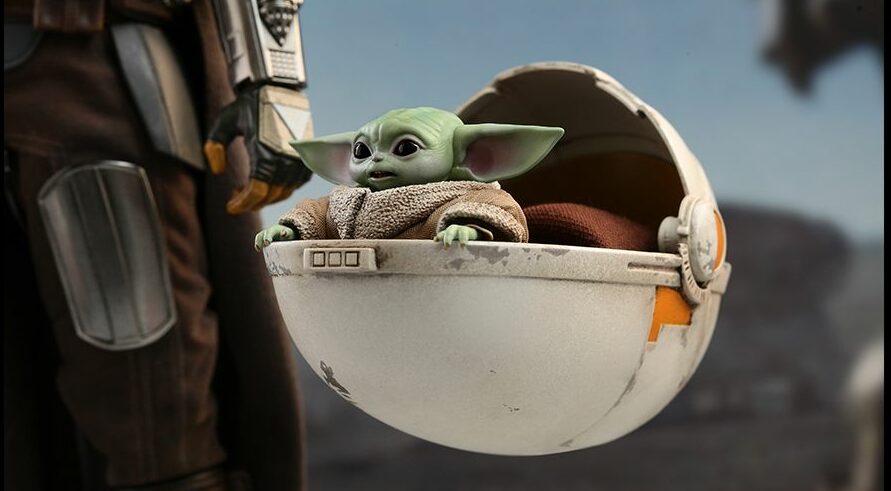 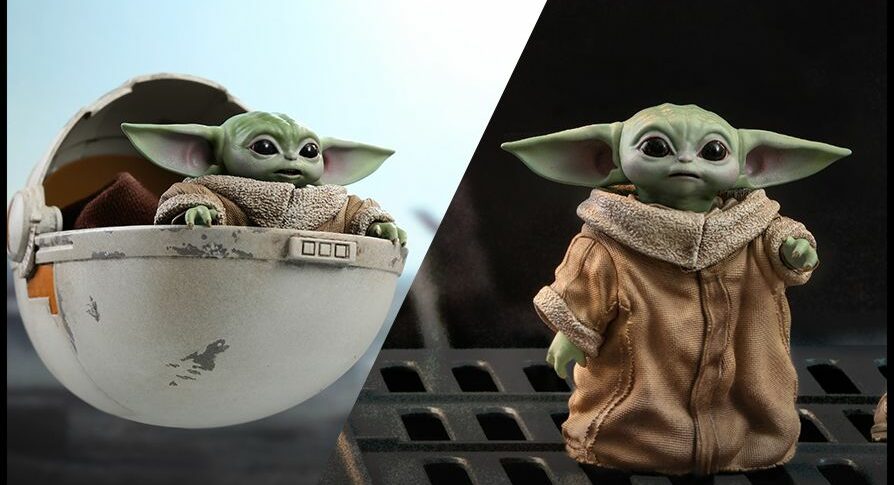 Although Baby Yoda figures are un-action designed, the two babies included are really worth it. 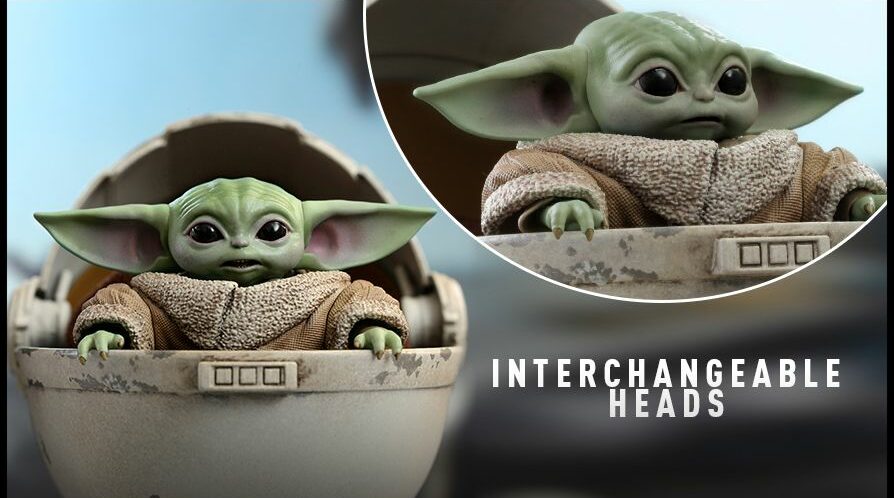 The head sculptures of the two Baby Yoda figures are interchangeable. In this way, different expressions can be recreated, and the playability is greatly improved. 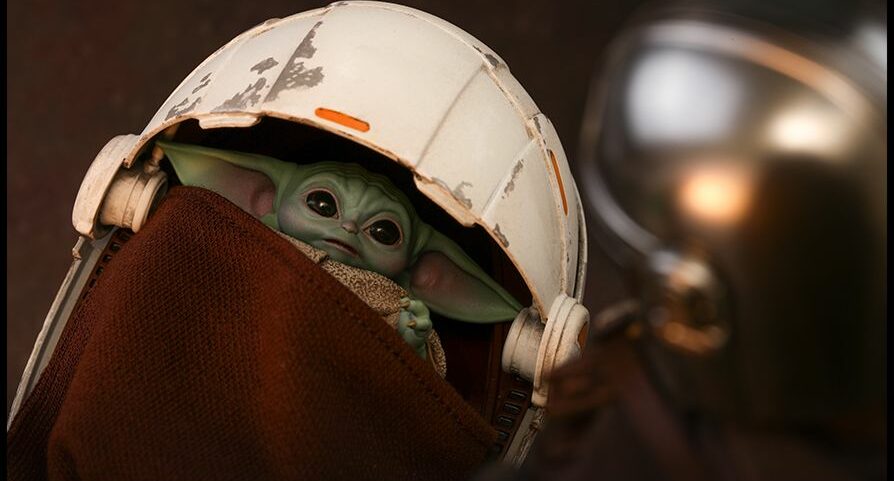 Includes a brown colored blanket, which can be covered on Baby Yoda‘s body to recreate the scene of him sleeping in the hover pram. 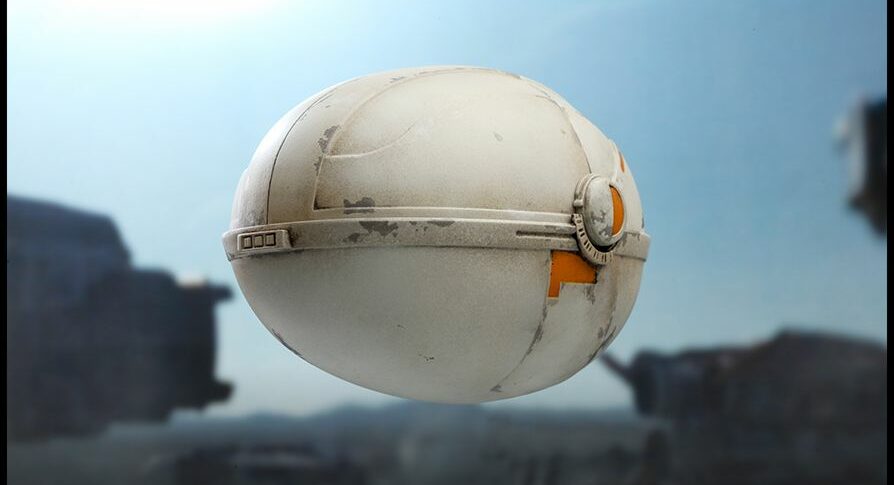 This hover pram has a cover and can be completely closed as showed in this picture. 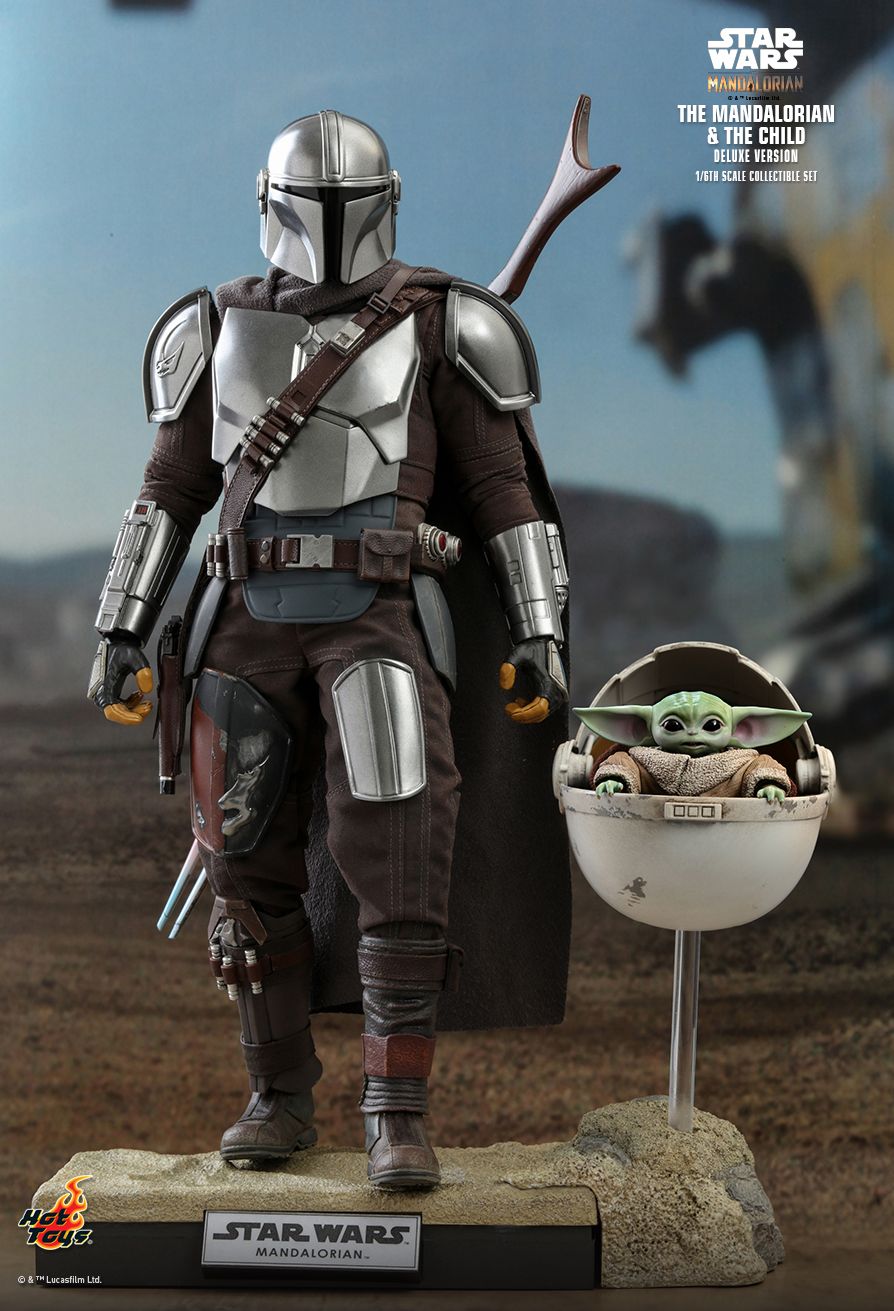 A specially designed figure stand with desert-theme diorama base accessory is included. The desert theme is the same as the Mandalorian’s, the two sets of figure stands can be seamlessly joined together, the effect is very good. 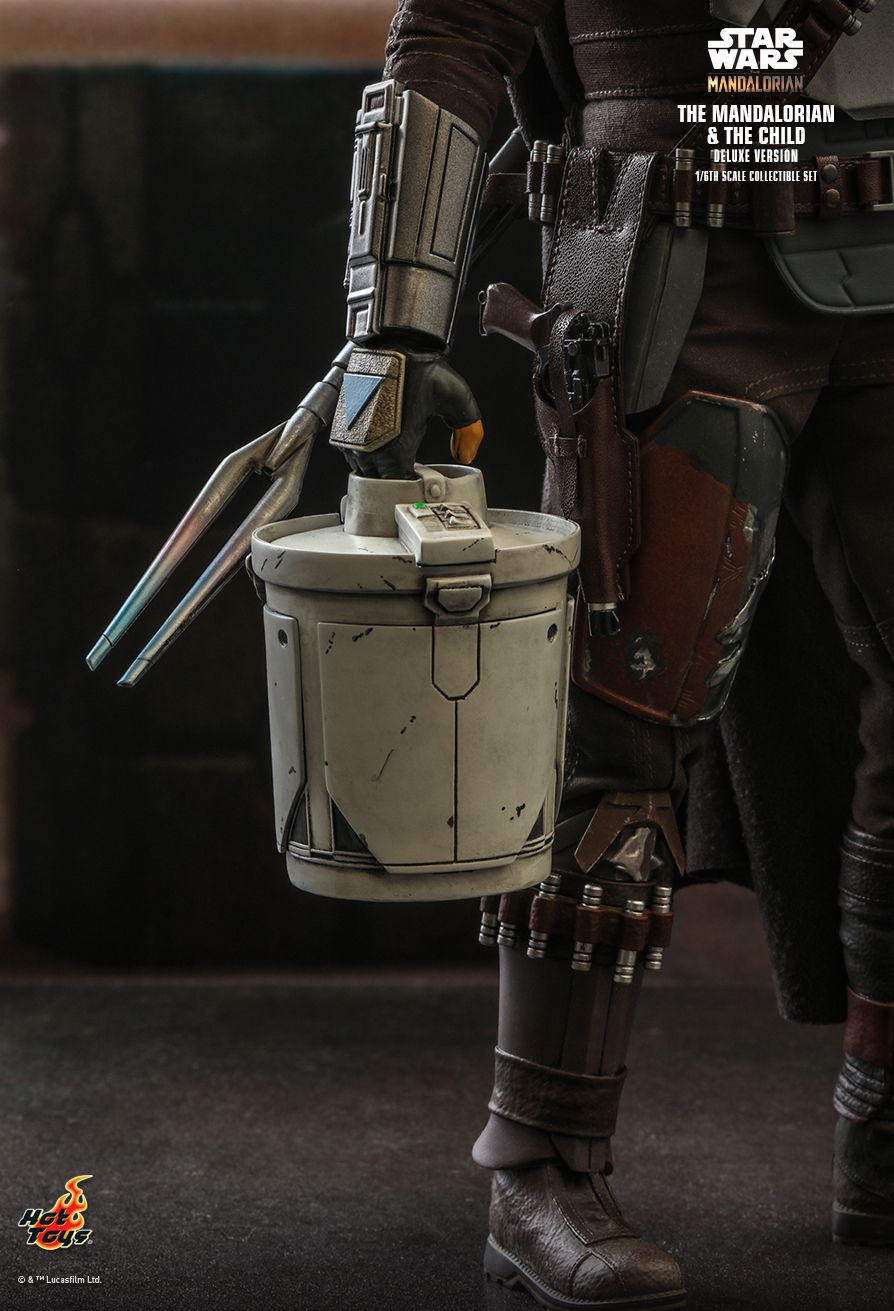 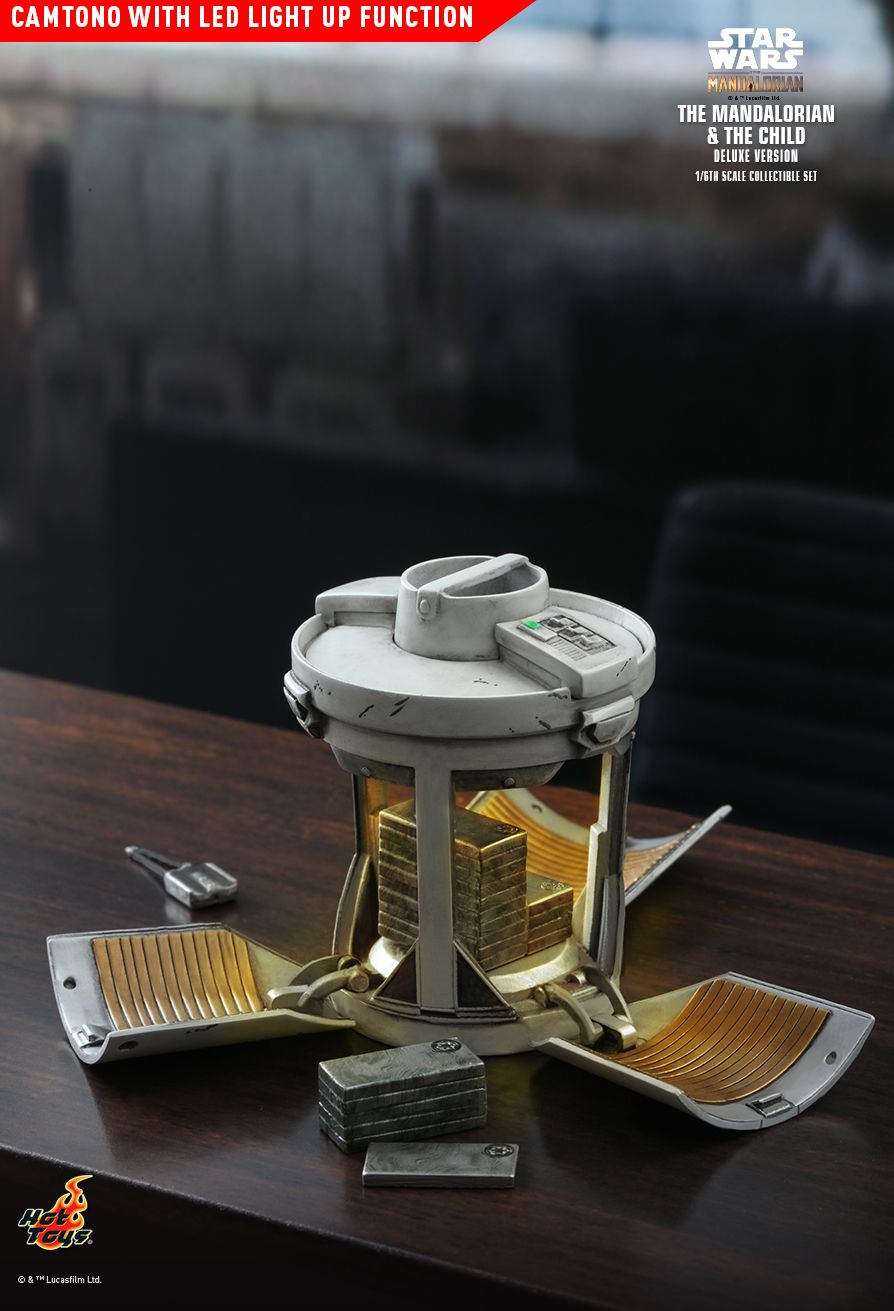 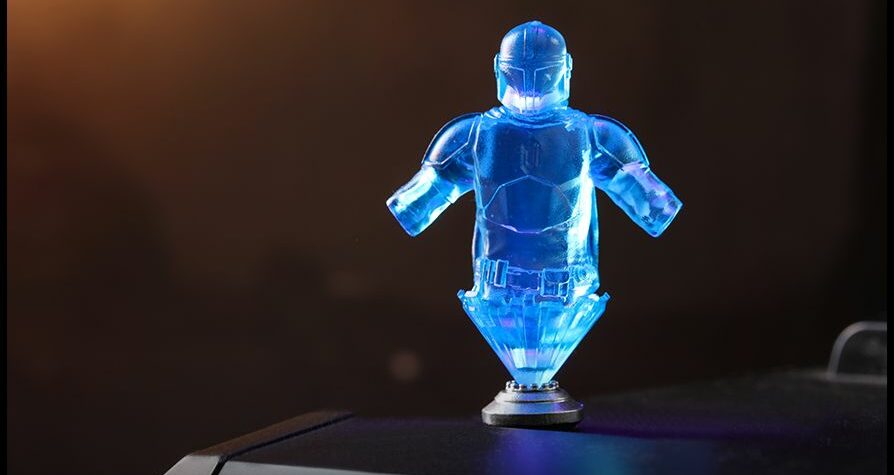 One hologram of The Mandalorian armor is included. 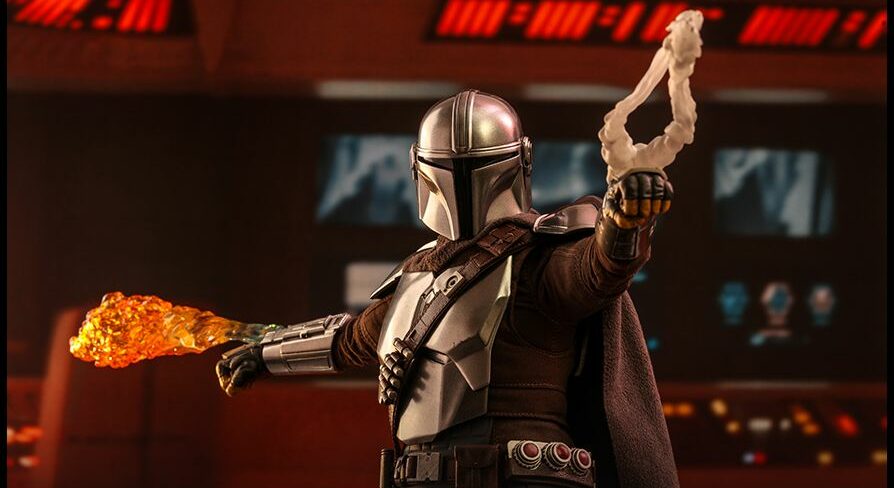 Finally, there is a whistling birds firing effects is included, which can be attached to left gauntlet. The whistling bird is powerful defensive equipment that is made from the remaining Beskar metal  to deal with multiplayer siege. 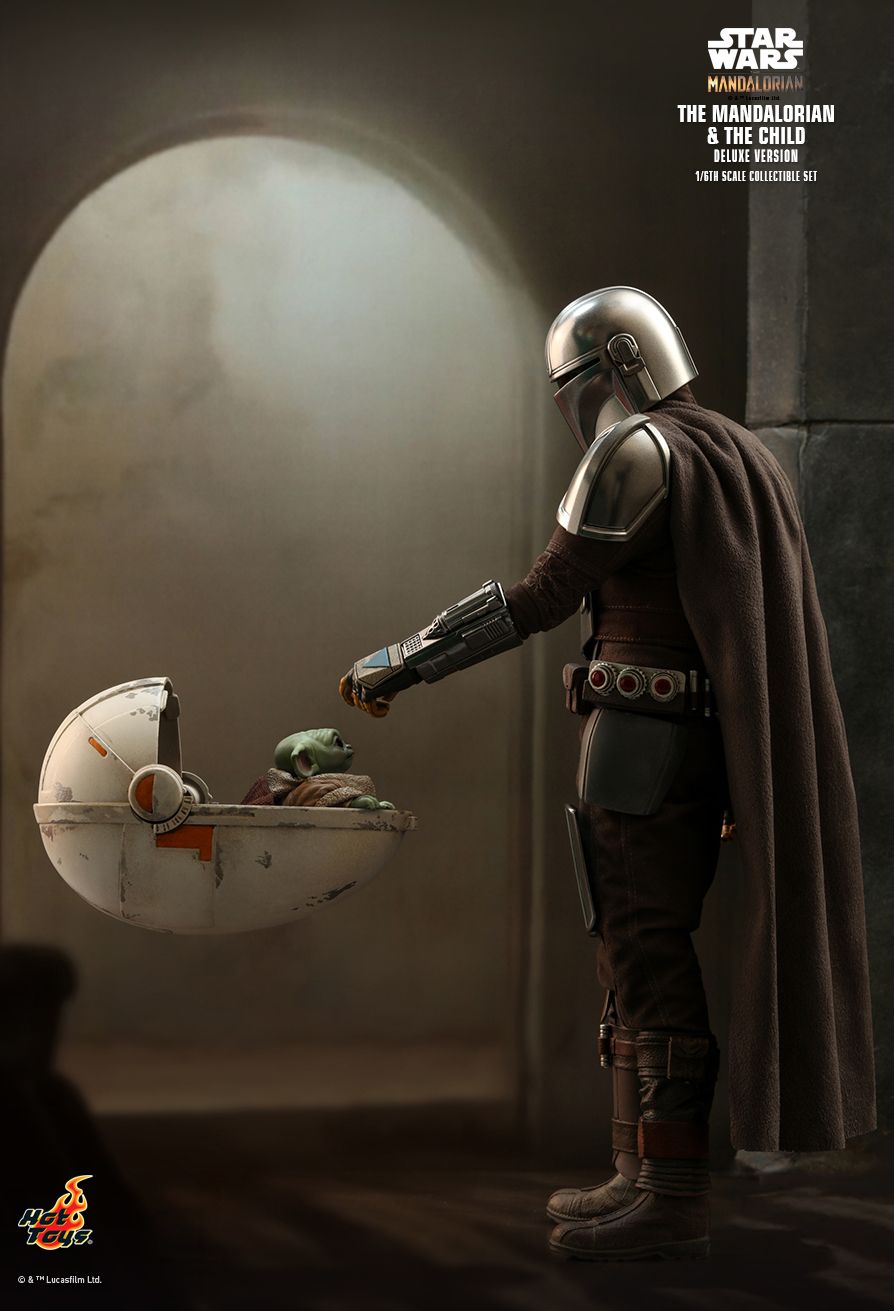 This Mandalorian 2.0 and Baby Yoda Collectible Set (Deluxe Version) is the definitive piece to add to your growing Star Wars expansion. This is the way.