Now the G.E.M. series of Megahouse presents a dynamic Naruto Uzumaki figure this month, and this time Naruto Uzumaki’s figure is based on his battle-ready appearance from the Fourth Shinobi World War! Let’s have a look! 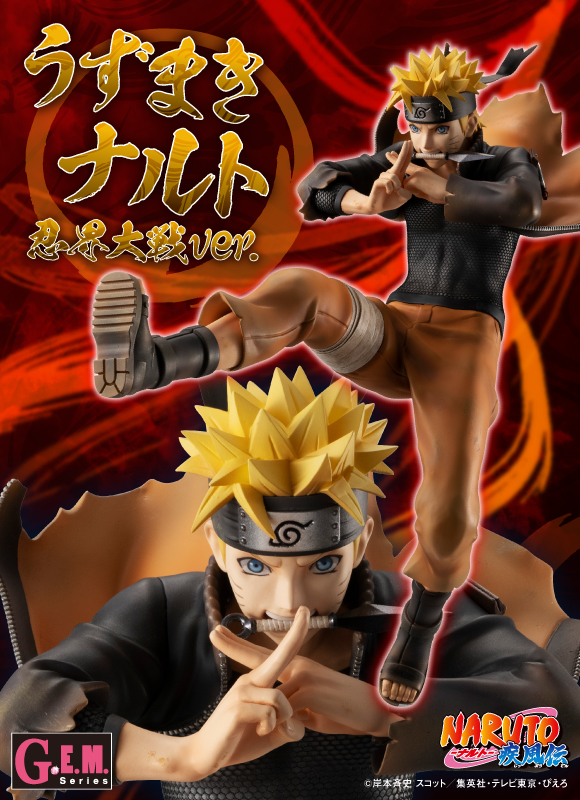 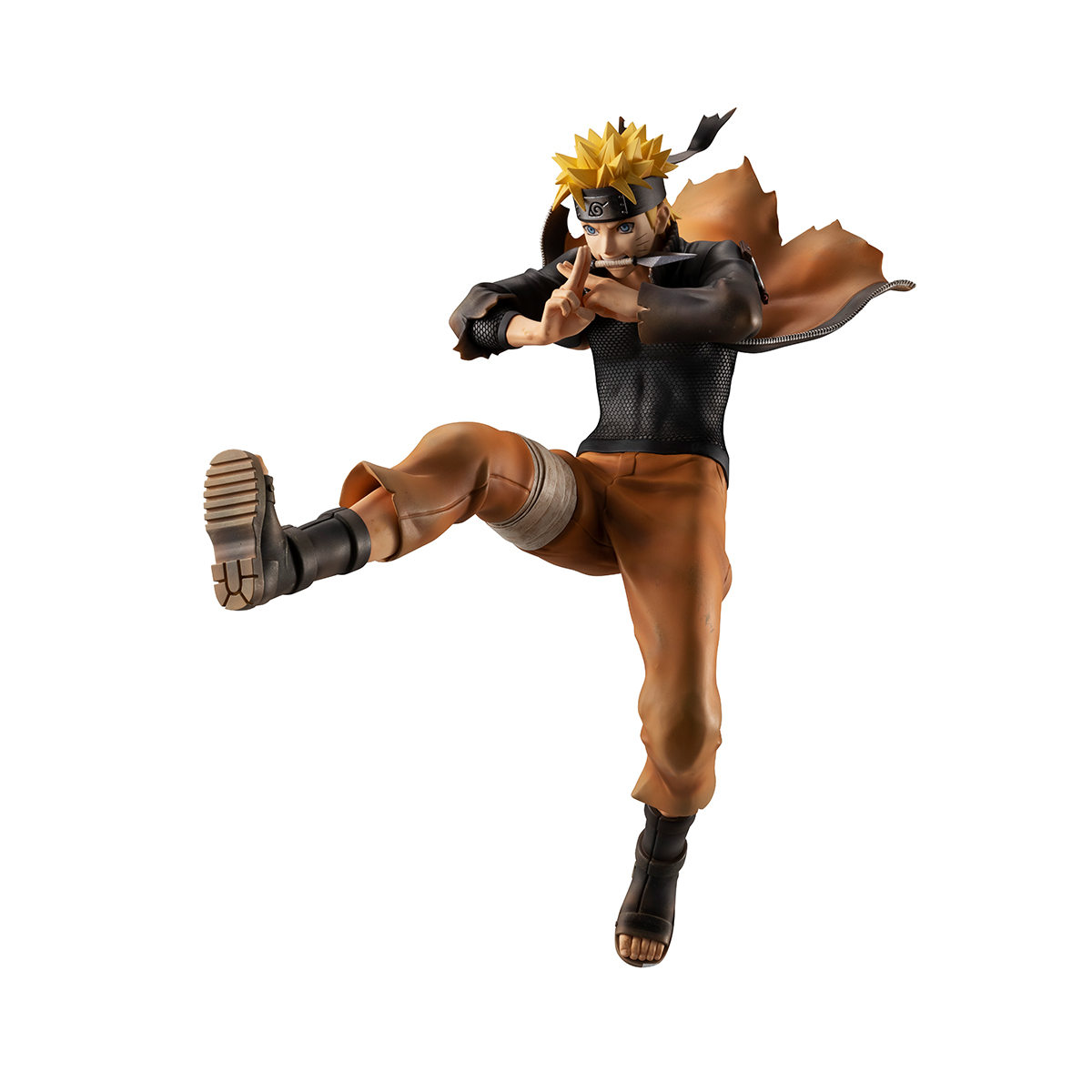 Instead of the usual standing figure, Megahouse’s Naruto Uzumaki figure adopts the pose that falling down from a height level. The dilapidated clothing and headband are flying up behind, all create a feeling of “speed” and “wind”.

From his right leg exaggerated lifting to 90 degrees, which shows Naruto Uzumaki adjusting his posture strongly to keep his balance during the falling. 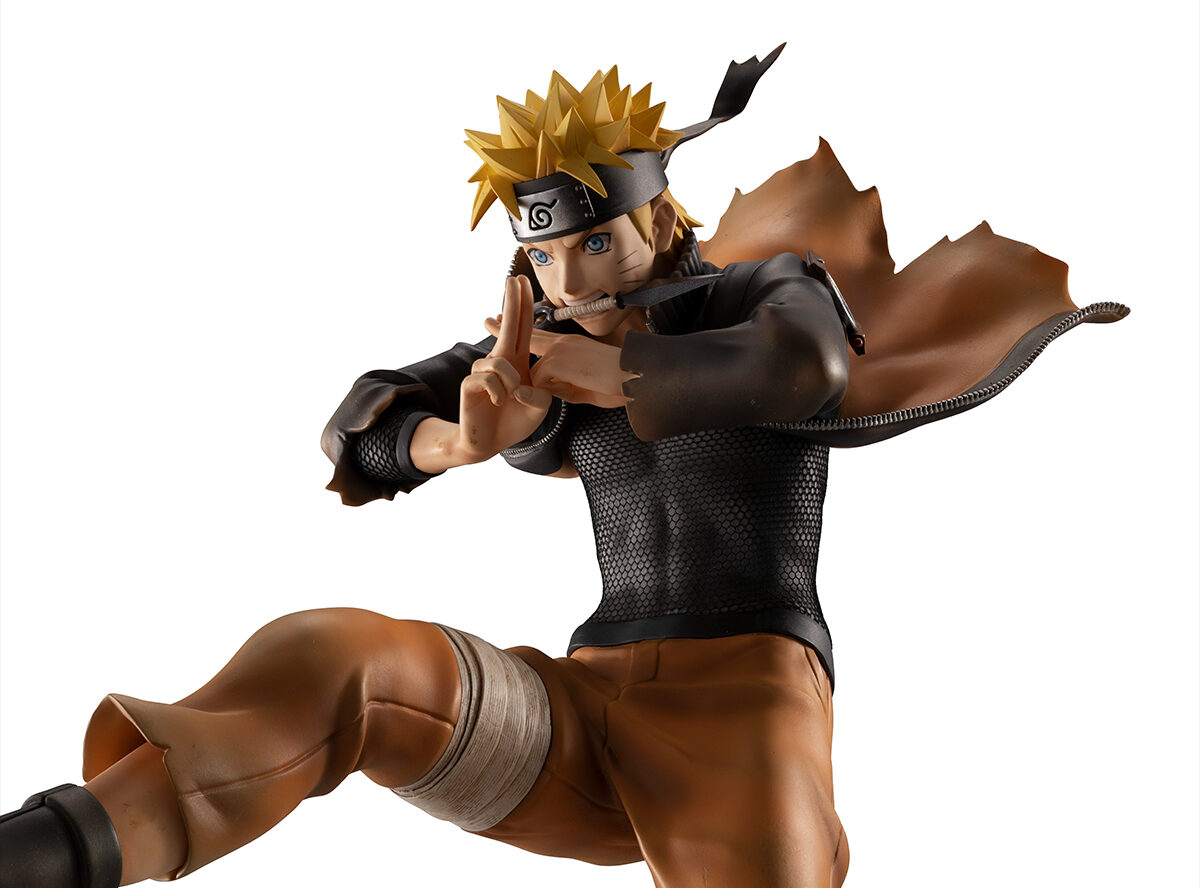 The hand seals of “Shadow Clone” and the Kunai in his mouth, shows Naruto Uzumaki already began to brew a wave of counterattack without a moment’s hesitation in such an unfavorable situation. 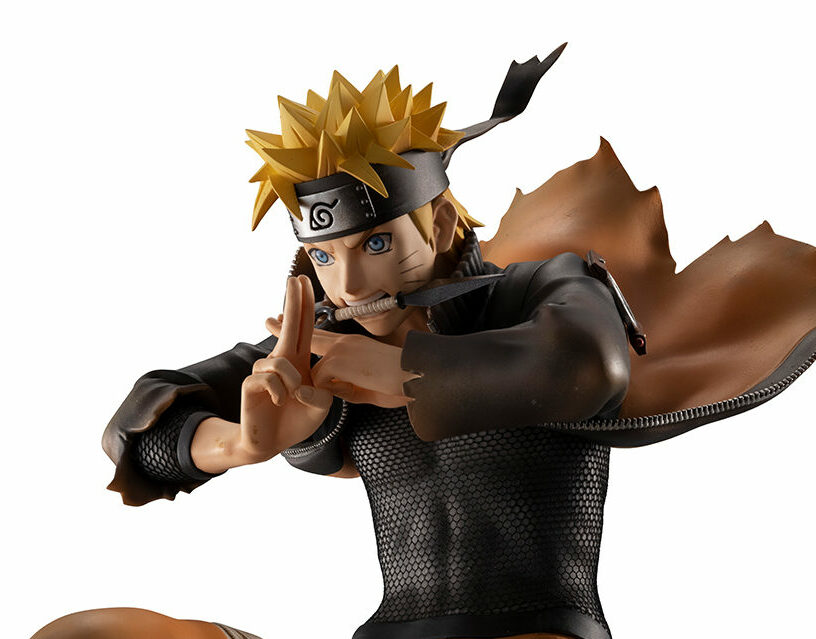 The portrayal of face carving is also absolutely wonderful. From the eyes of Naruto Uzumaki clenching the enemy’s figure, it can be seen that this moment is a fleeting opportunity to attack! By the way, the tight muscles on the face are handsome and also suggest the intensity of the battle. 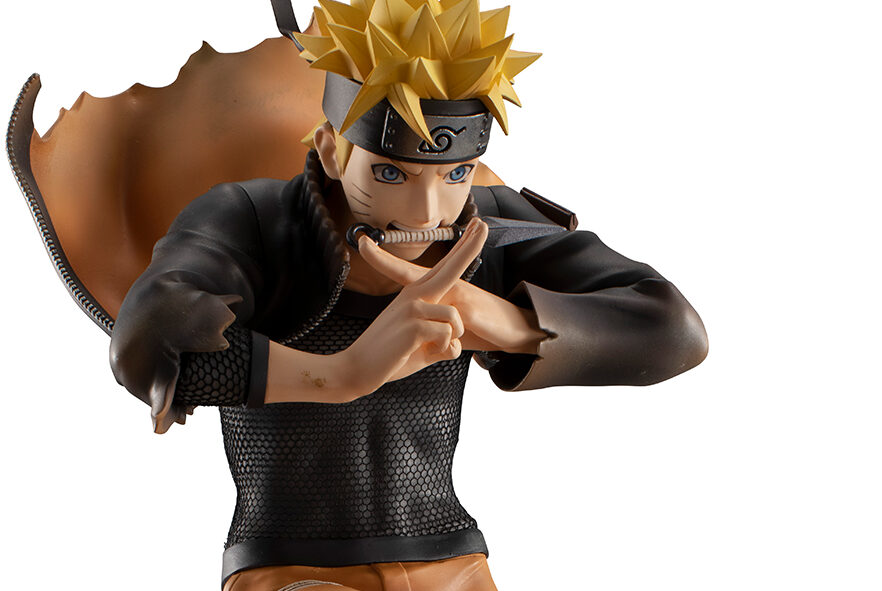 It is worth mentioning here that the chain mail part of Naruto Uzumaki‘s outfit is not painted! In order to highlight the realism of the clothes, it makes use of a real netted material for the first time. Through the mesh, you can vaguely see Naruto Uzumaki’s tight chest and abdominal muscles. 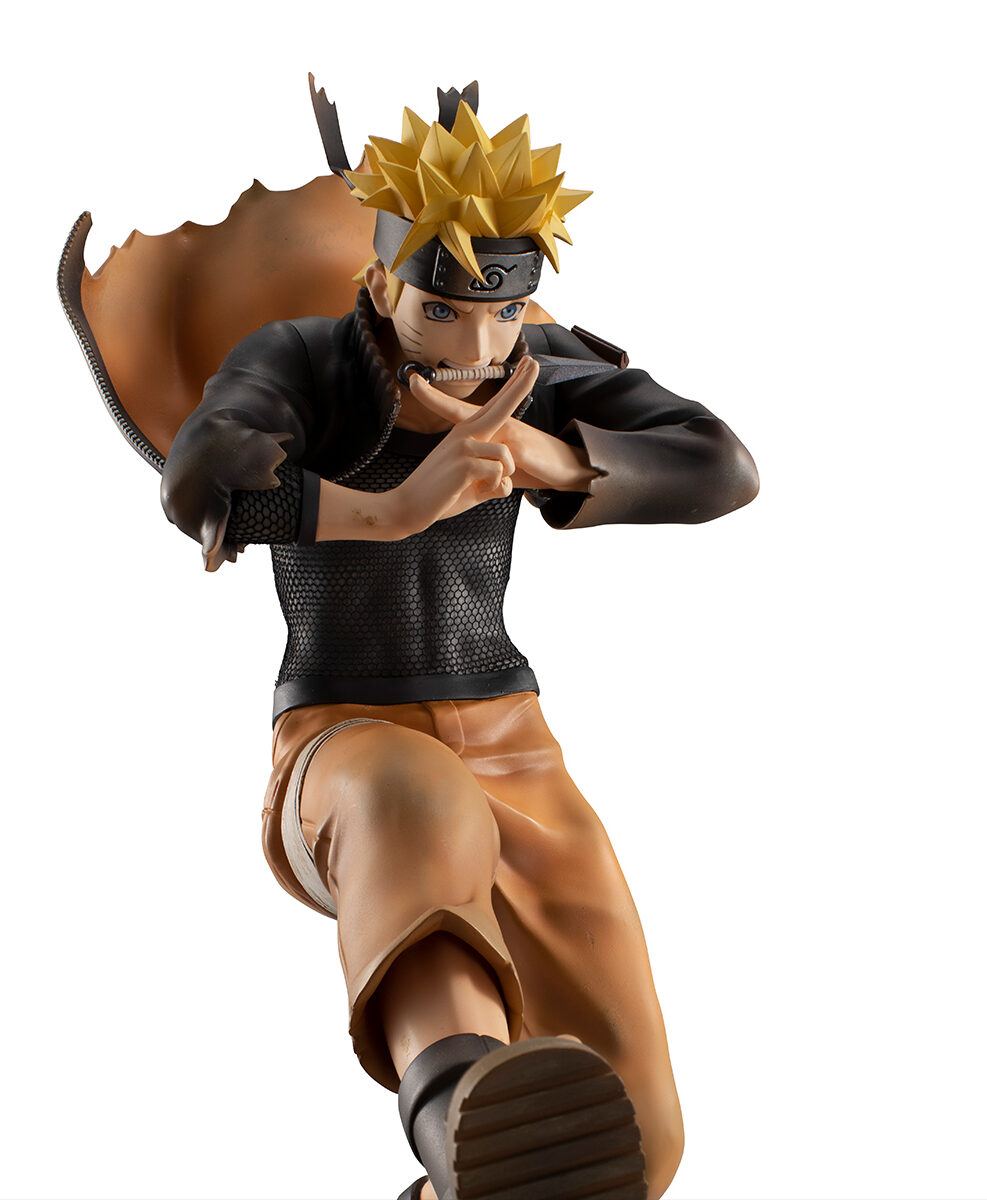 The painting of Naruto Uzumaki‘s clothes is also very characteristic this time. The orange in this figure is not very bright, but has been finished with matting and weathering treatments, and then matched with the damaged shape of the cuffs and corners to highlight the tragic intensity of the Fourth Shinobi World War. 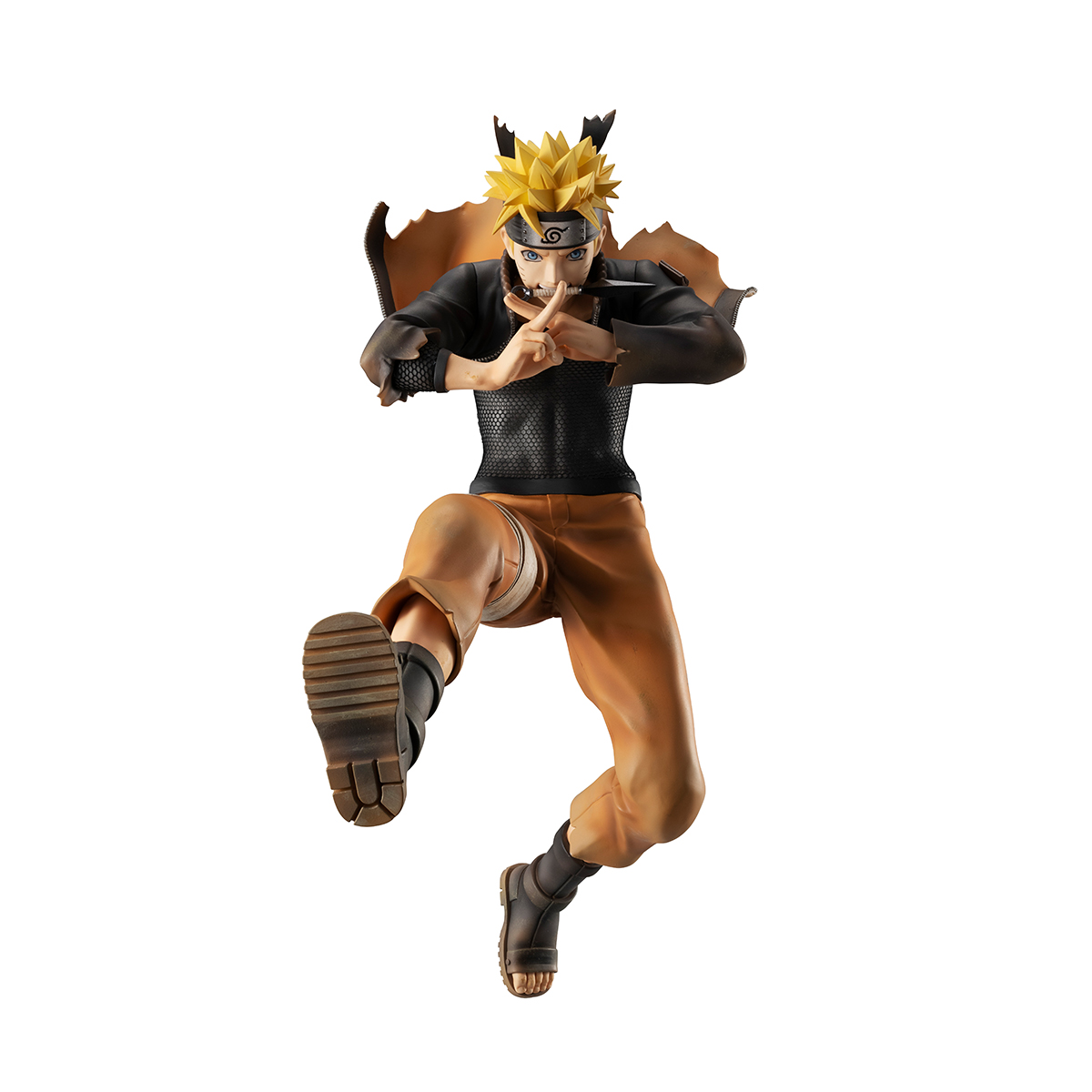 We can see that the soles also have a very obvious dust-contaminated effect. In my impression, this is the first figure which Megahouse’s “Naruto” has such a strong aging effect.

So from the perspective of the wonderful styling and painting effect, this Naruto Uzumaki figure is still very impressive.