Do you remember the 2019 monster film “Godzilla: King of Monsters“? Are you impressed with the Godzilla in the burning appearance?
There is good news for fans who like Godzilla’s collectibles. MegaHouse‘s UA Monsters series recently presents a Burning Godzilla figure from the film “Godzilla: King of Monsters”. The built-in LED of this figure can emit red light like magma, which is quite distinctive. Let’s have a look! 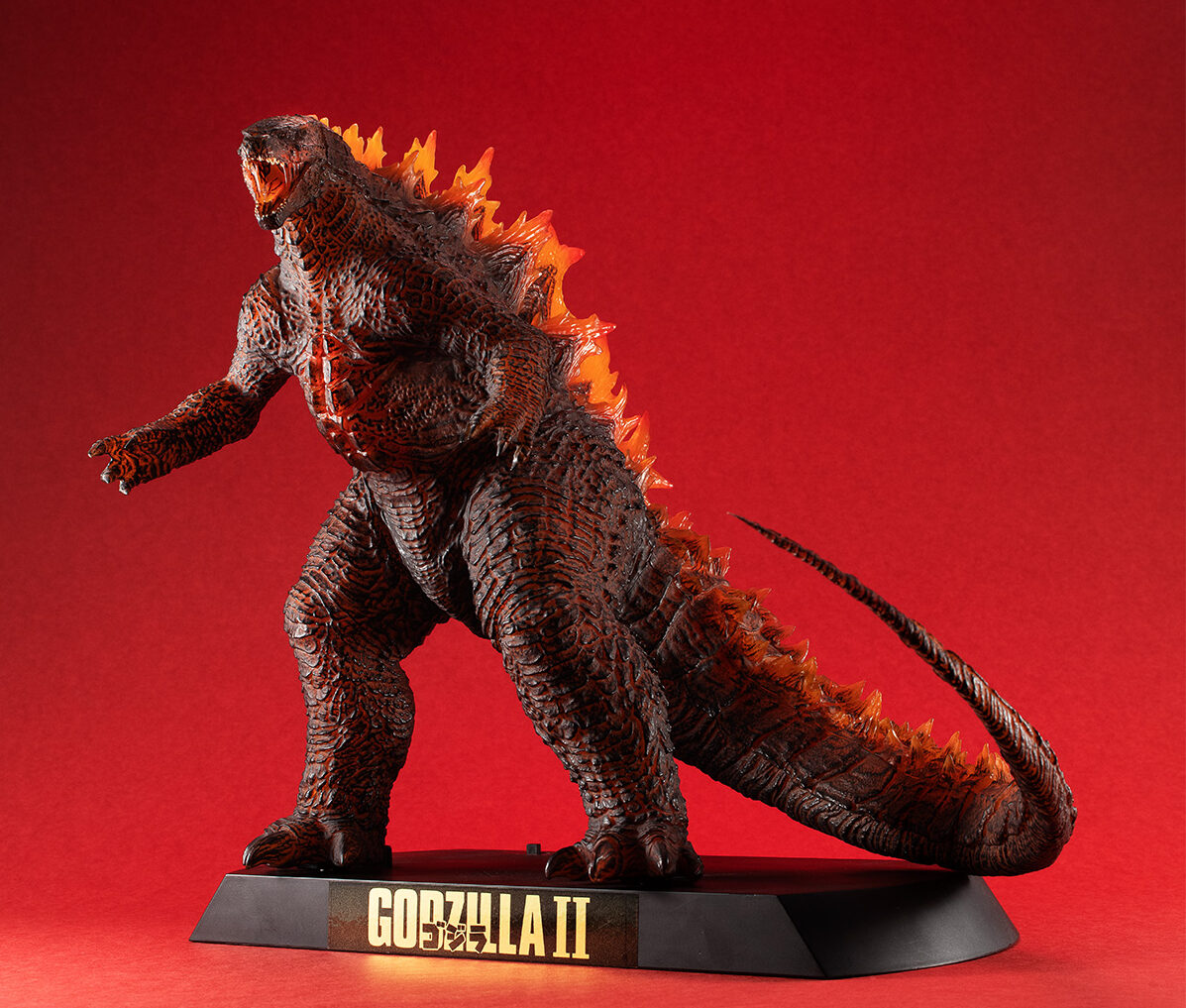 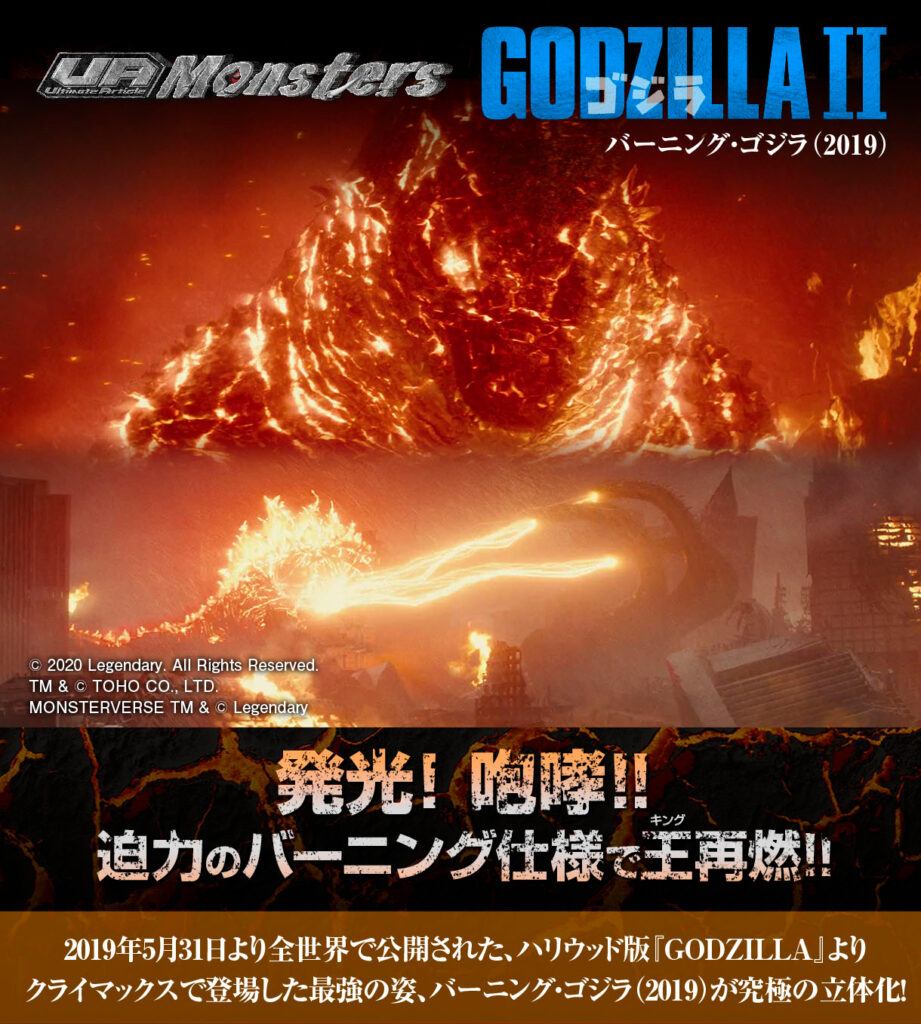 Burning Godzilla only appeared at the last critical moment of the film. The death of Mothra inspired Godzilla to enter the burning appearance, then his combat power instantly rose. It almost immediately killed the King Ghidorah in one seconds. It can be said that Burning Godzilla is currently the strongest form of Godzilla in the movie. 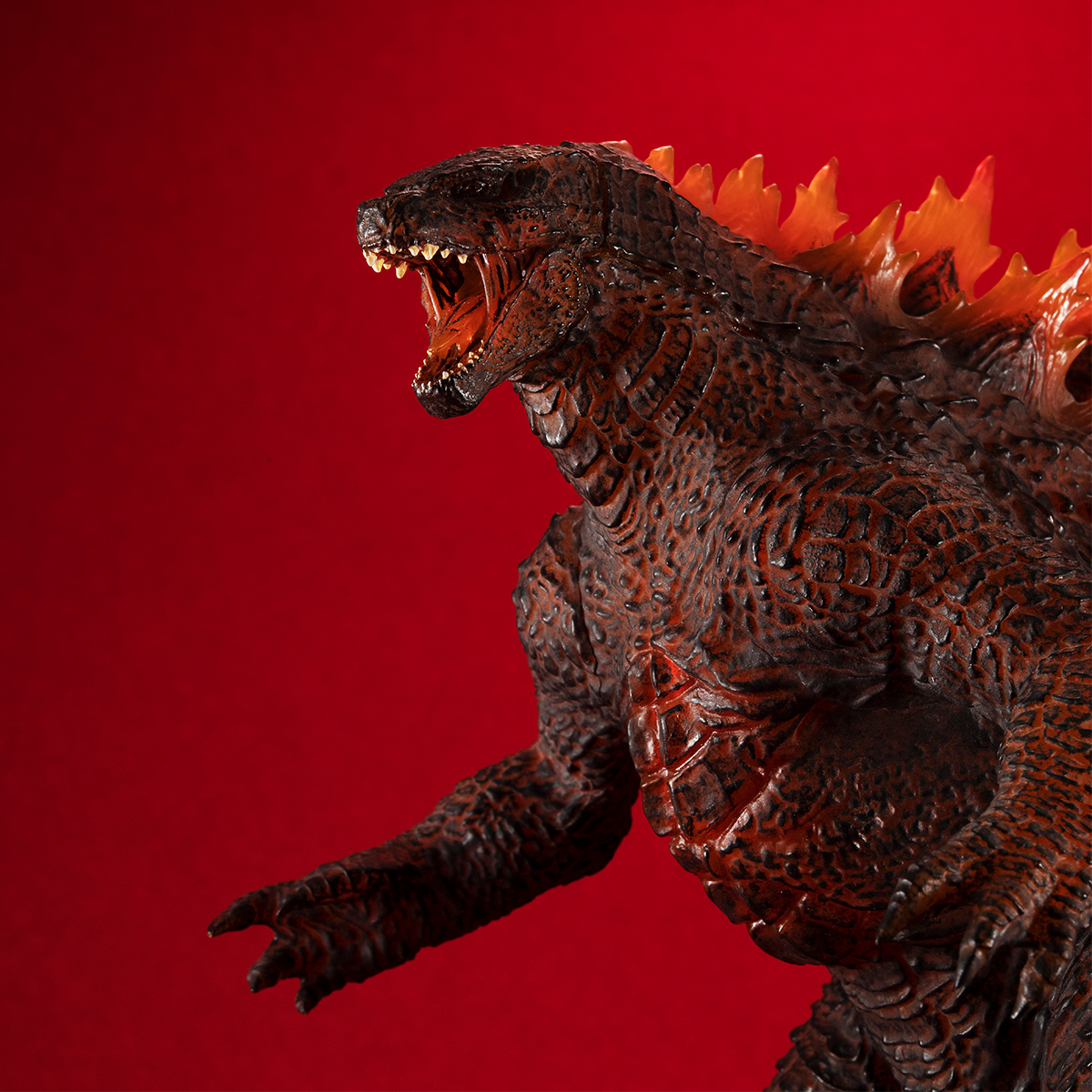 The details on the surface of Godzilla’s skin are very delicate, and the painting part is also well restore the real texture.
In the non-luminous state, you can faintly see the light-transmitting material of the subcutaneous body of this Burning Godzilla figure. 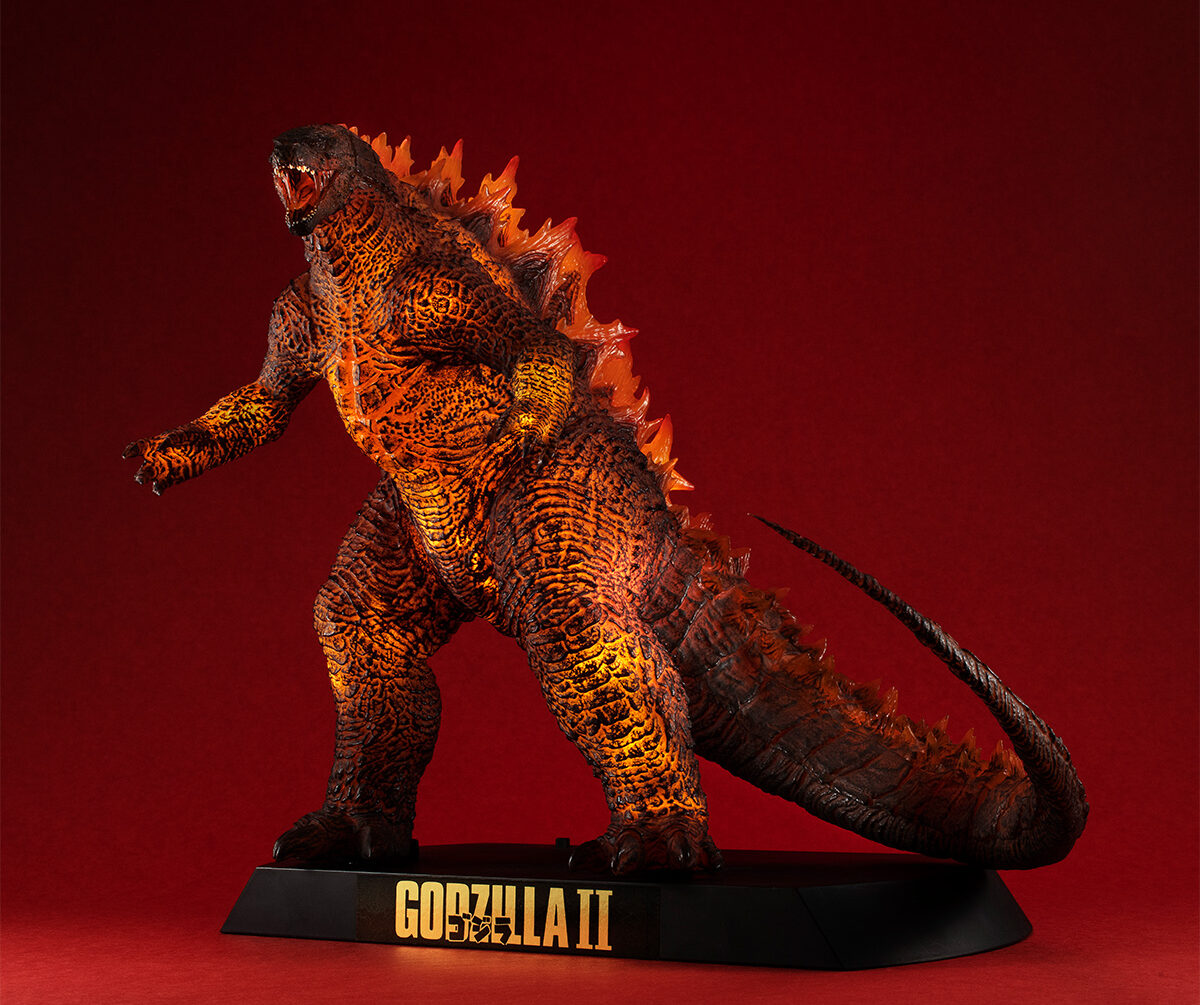 The most exciting part is the built-in LED mechanism of this Burning Godzilla figure. Except for the tail, light can be transmitted throughout the whole body, even the palms and feet. 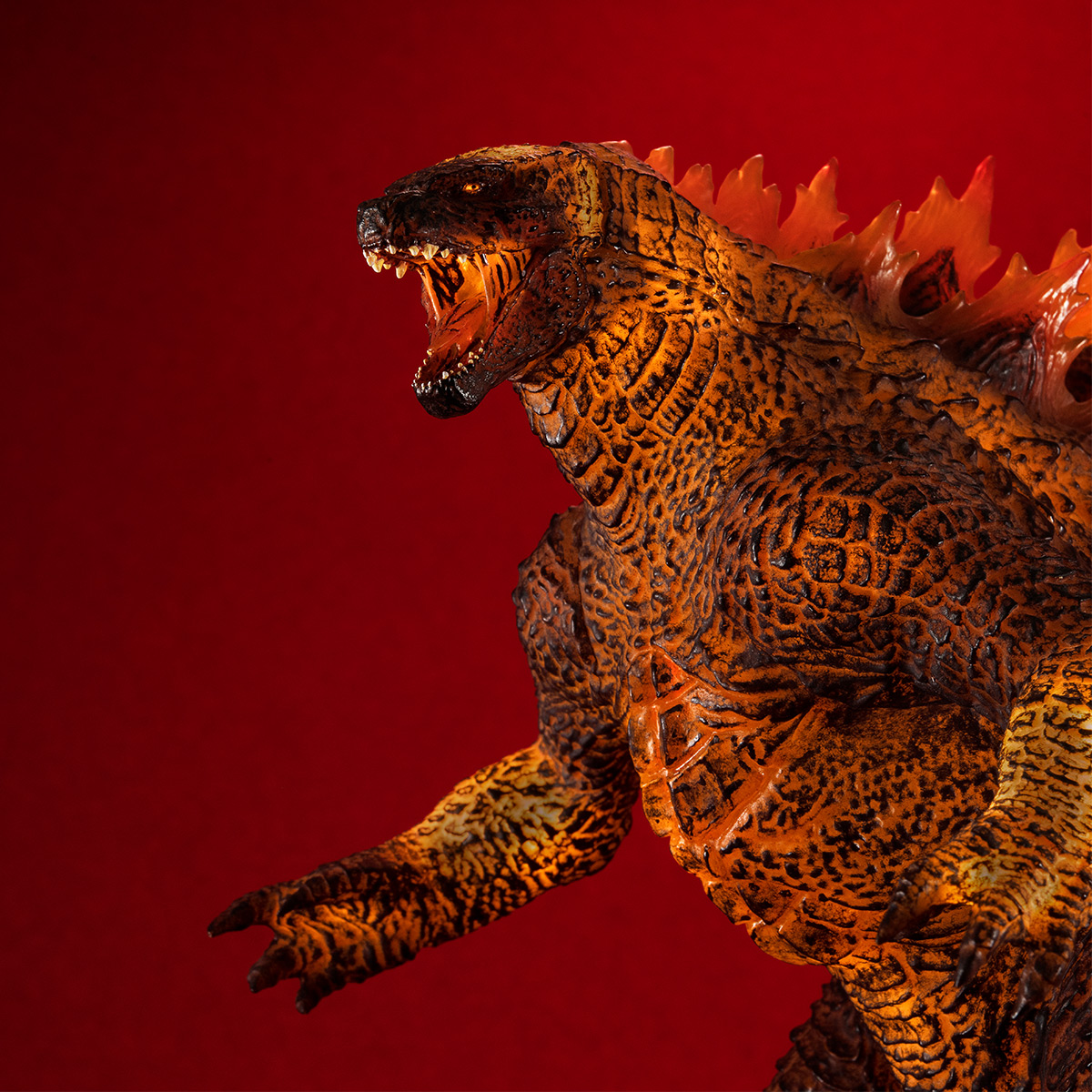 The head sculpt of Burning Godzilla is very vivid because of the light effect on the inside.The bright red eyes and the magma-colored mouth greatly enhance the display effect of the head sculpt. 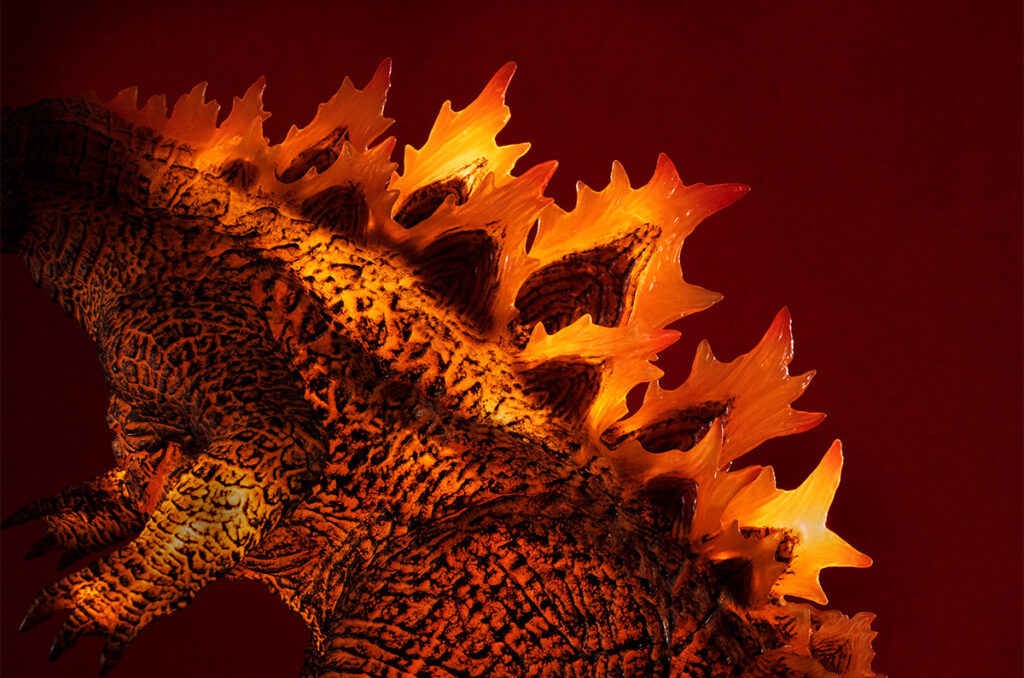 The built-in LED mechanism of the dorsal fin is also very good, it feels like magma is flowing in the body. 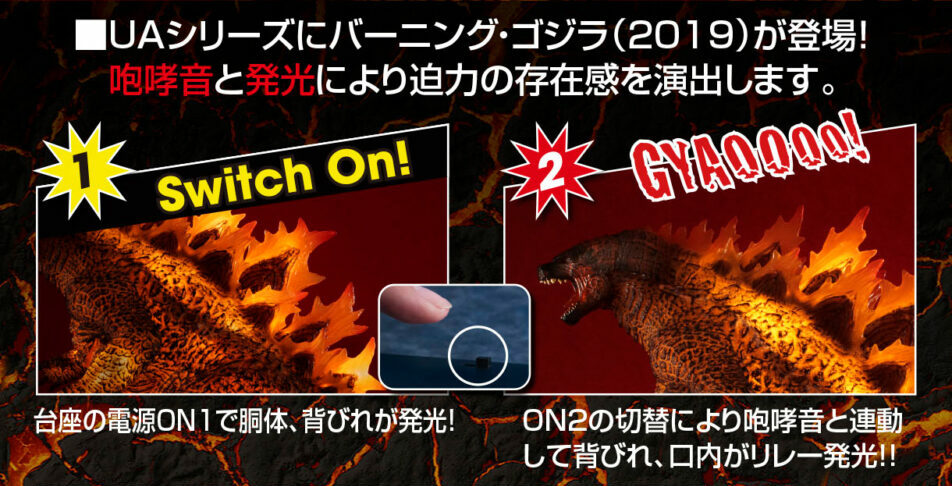 This Burning Godzilla figure has two switches of light effects that can be controlled. When the switch is ON1, the whole body glows red, and when it is switched to ON2, the light effects of the dorsal fin and mouth will flash alternately, and at the same time it will make roaring sound of Godzilla.

The sound and light control switch is on the base, there is no USB cable in the picture,  it should be the built-in battery design of the base.

The total height of this Burning Godzilla figure reaches approx. 30 cm. When the lights and roaring sound are switched on, the overall effect is really amazing.

Also, there is an official video of Burning Godzilla figure for your reference.