Vegeta‘s popularity in fans of Dragon Ball has always been high. Why does Vegeta have such an amazing popularity?
Probably because the character description of Vegeta has a lot of resonance. Strong self-esteem, softness deep in his heart, perseverance that ordinary people can’t match, and being a good husband and father. I think these factors have attracted a large numbers of fans. 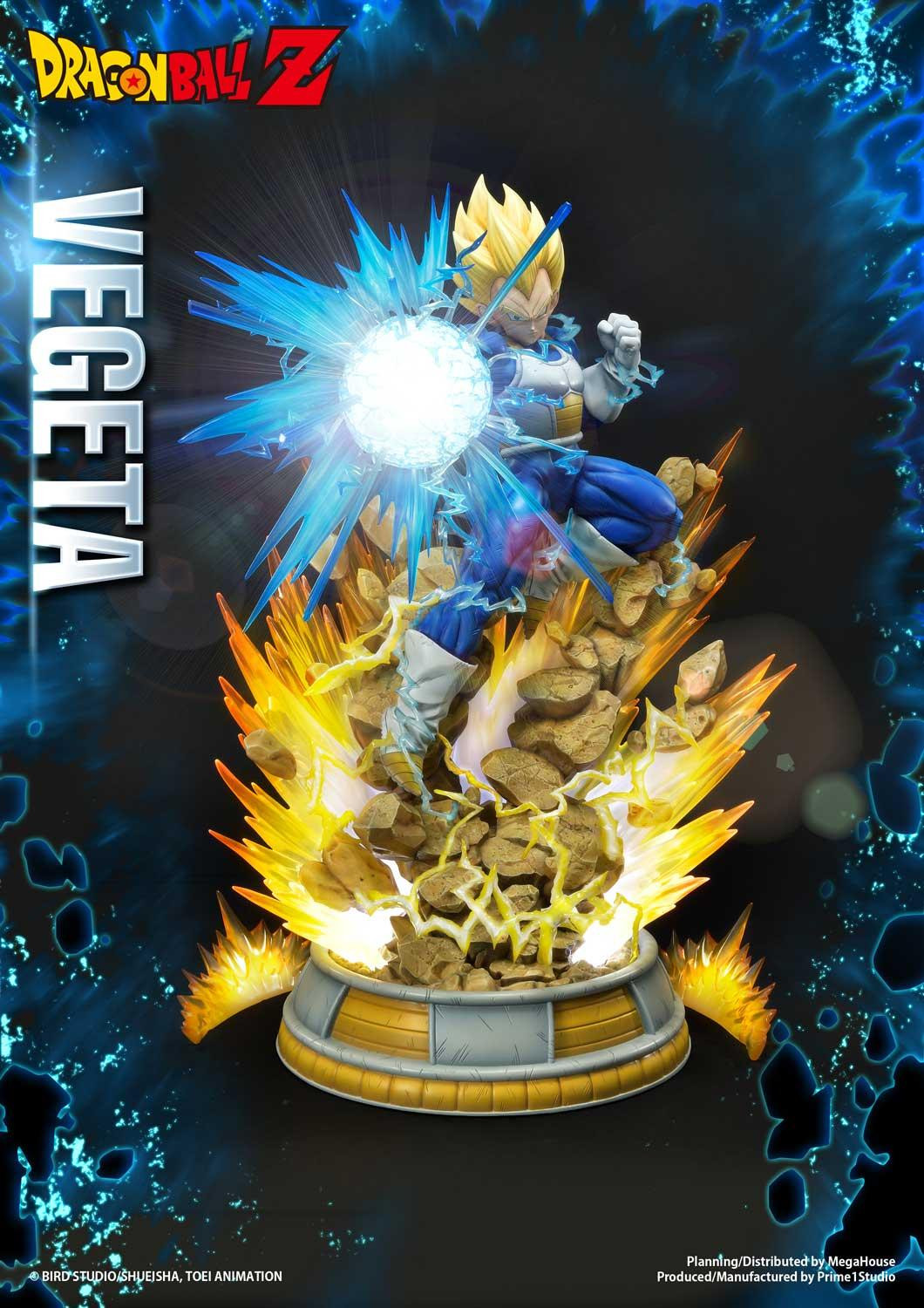 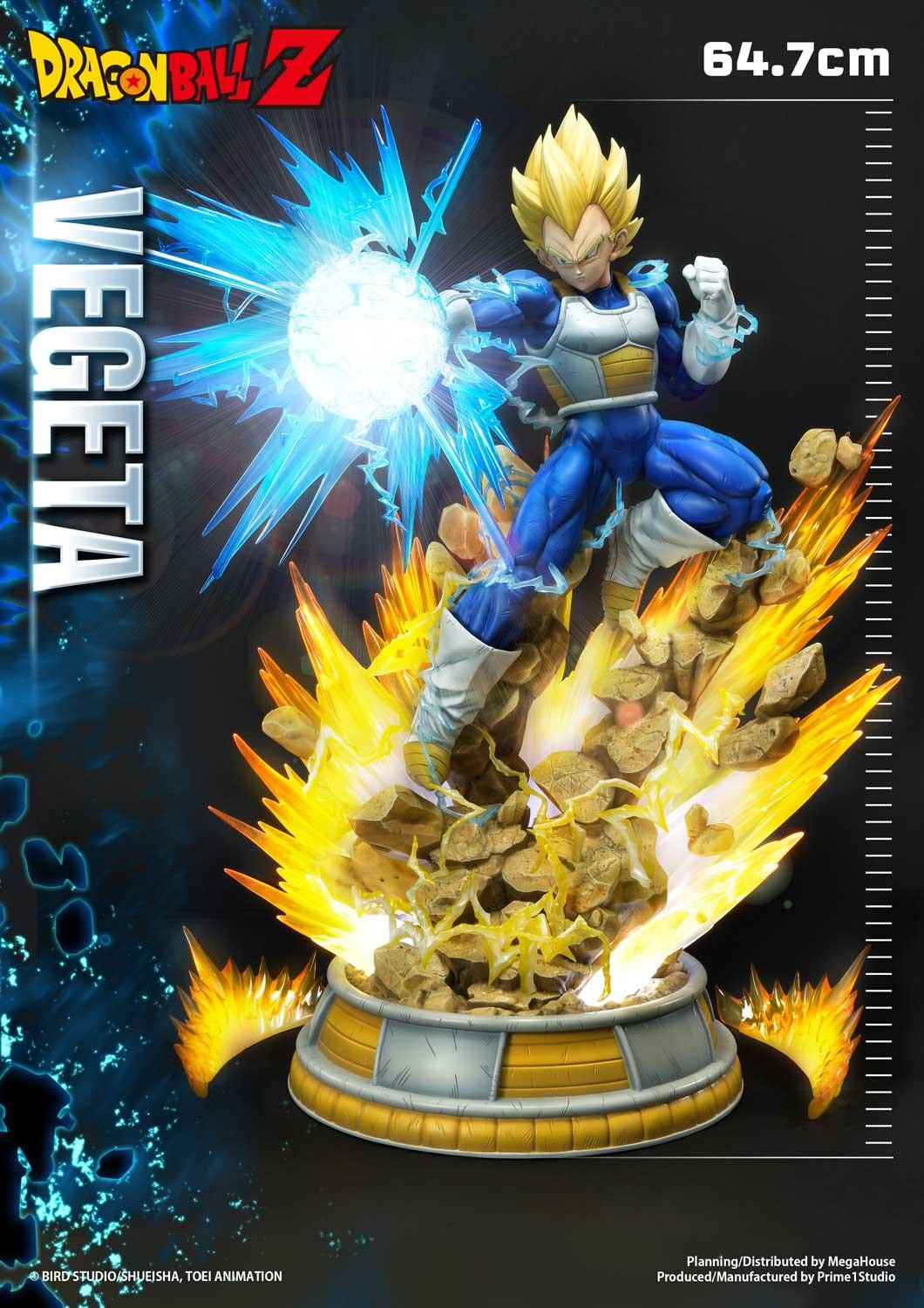 This statue is 1/4 scale, and its height reaches 64.7 cm. It is designed as a pose that Vegeta is charging his “Big Bank Attack“! 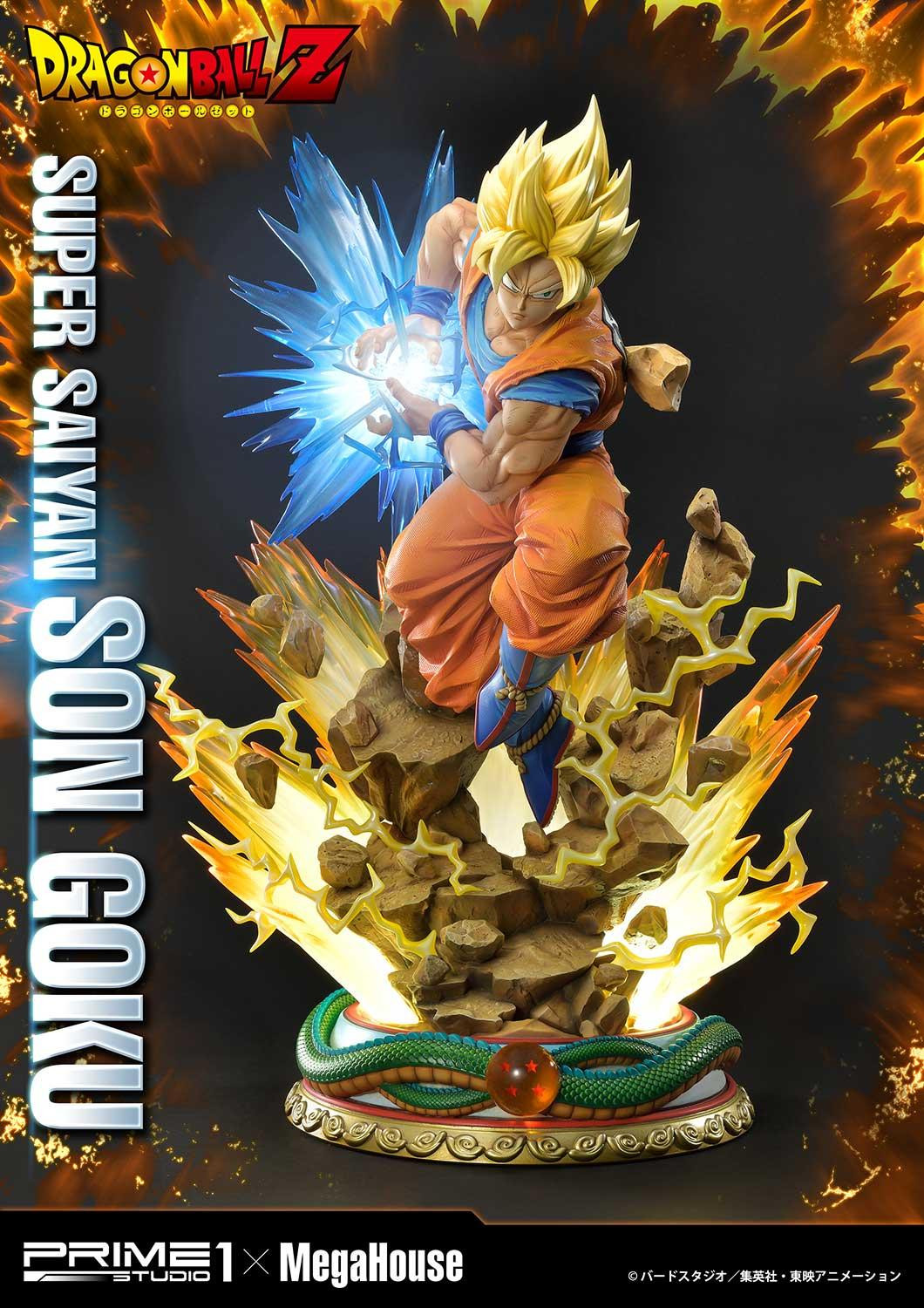 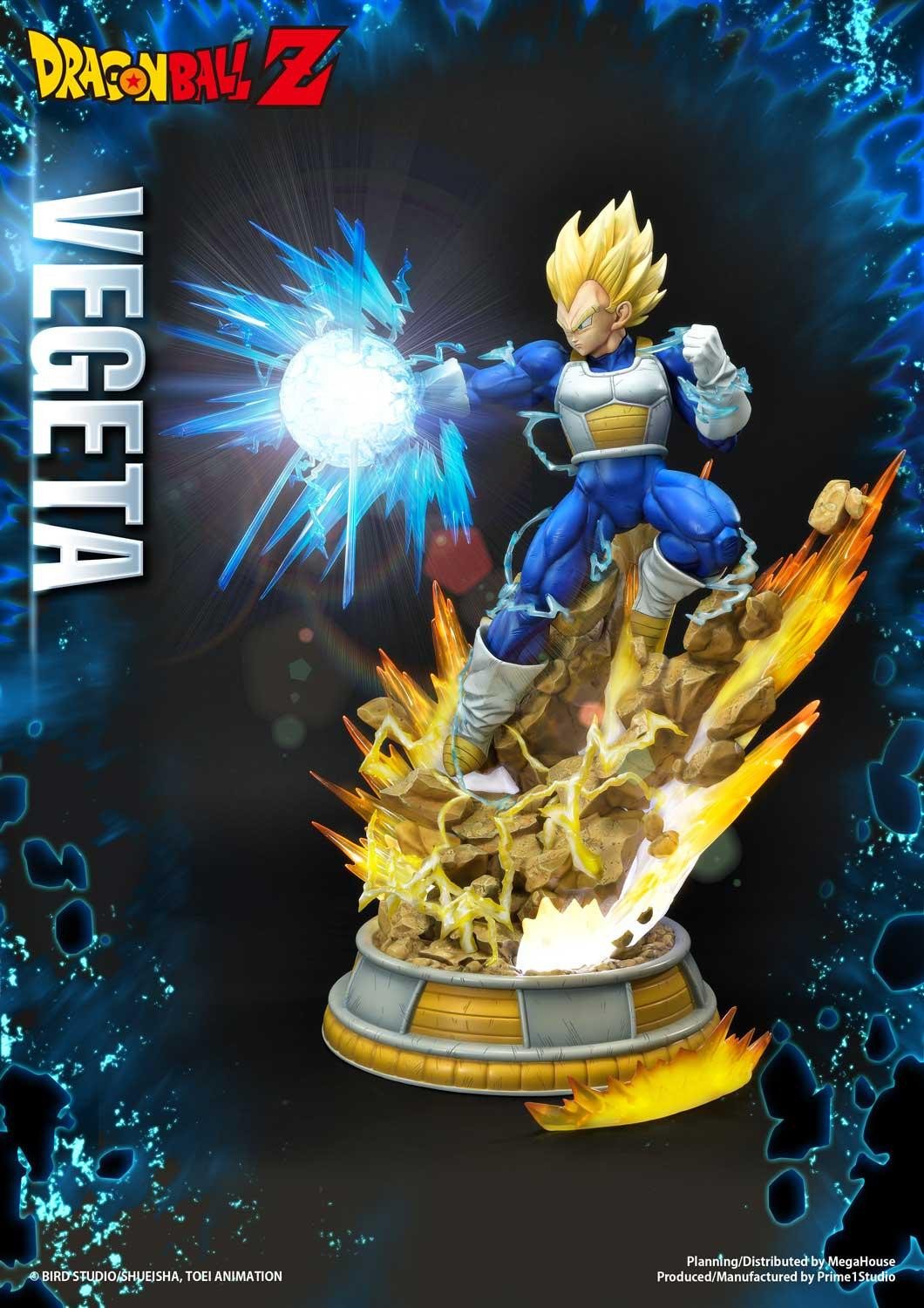 I have introduced the Son Goku statue last time. If you are interested in it, you can check out  the Review of Goku statue through the link below. Compared with Goku, the Vegeta‘s pose is one hand stretched forward to charge his “Big Bank Attack“, the energy wave is completely exposed in front of you, so the visual impact effect is stronger than Goku’s Kamehameha Pose. 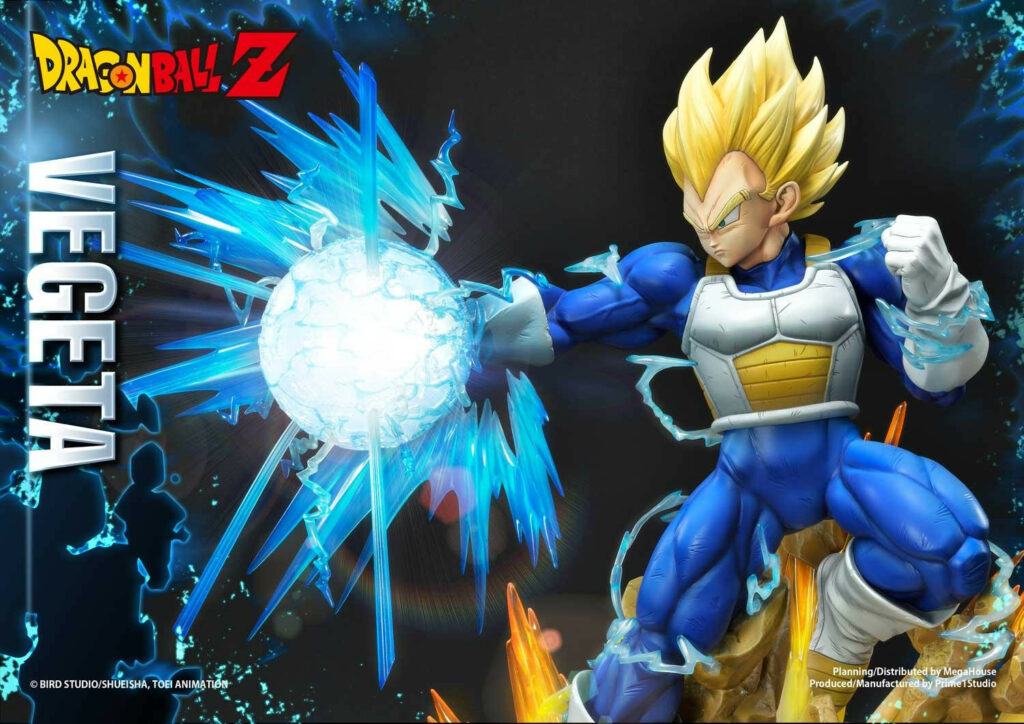 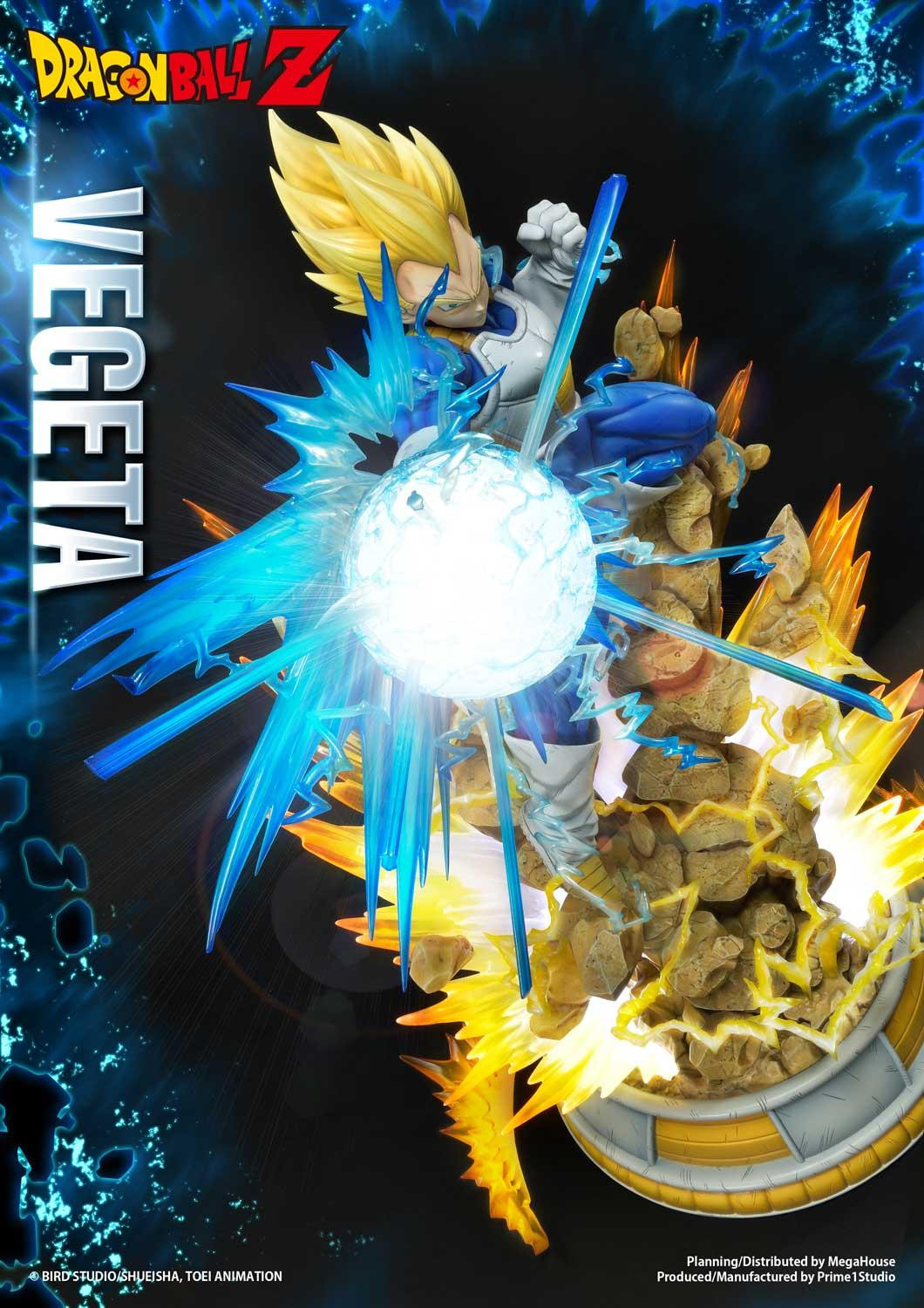 This blue special effect of  “Big Bang Attack” is really awesome, the details of energy wave are depicted very well.
You can see the beam of energy wave overflowing and splashing, and the surface of the energy wave is bright to white, it will definitely produce a huge explosion when it is launched. 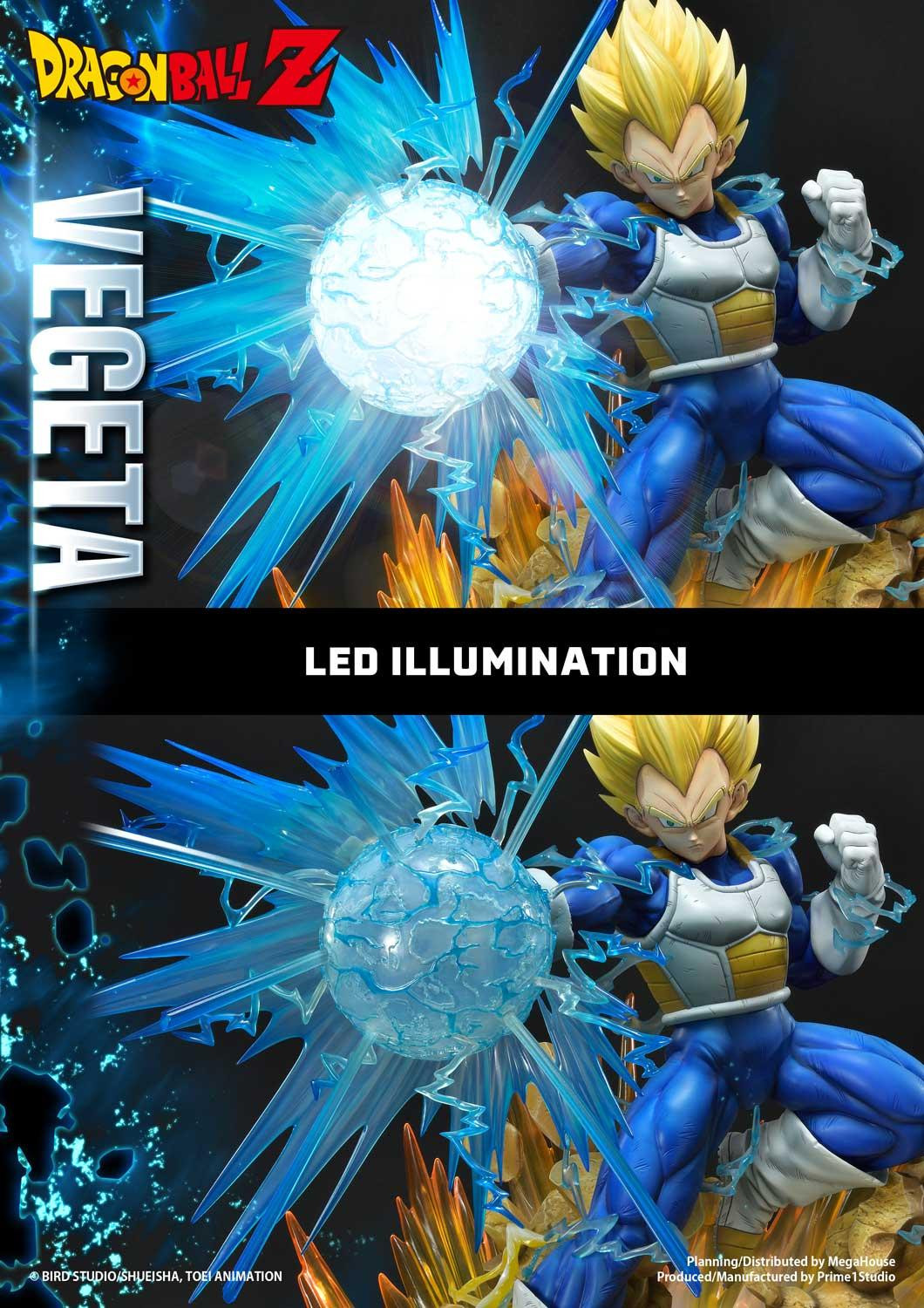 Of course, it is the same as the Goku statue, the blue special effect of energy wave has built-in LED lights. After turning off the light, you can also see the current shape on the surface is entangled of lightning, which is much more gorgeous than the Goku statue’s energy wave. 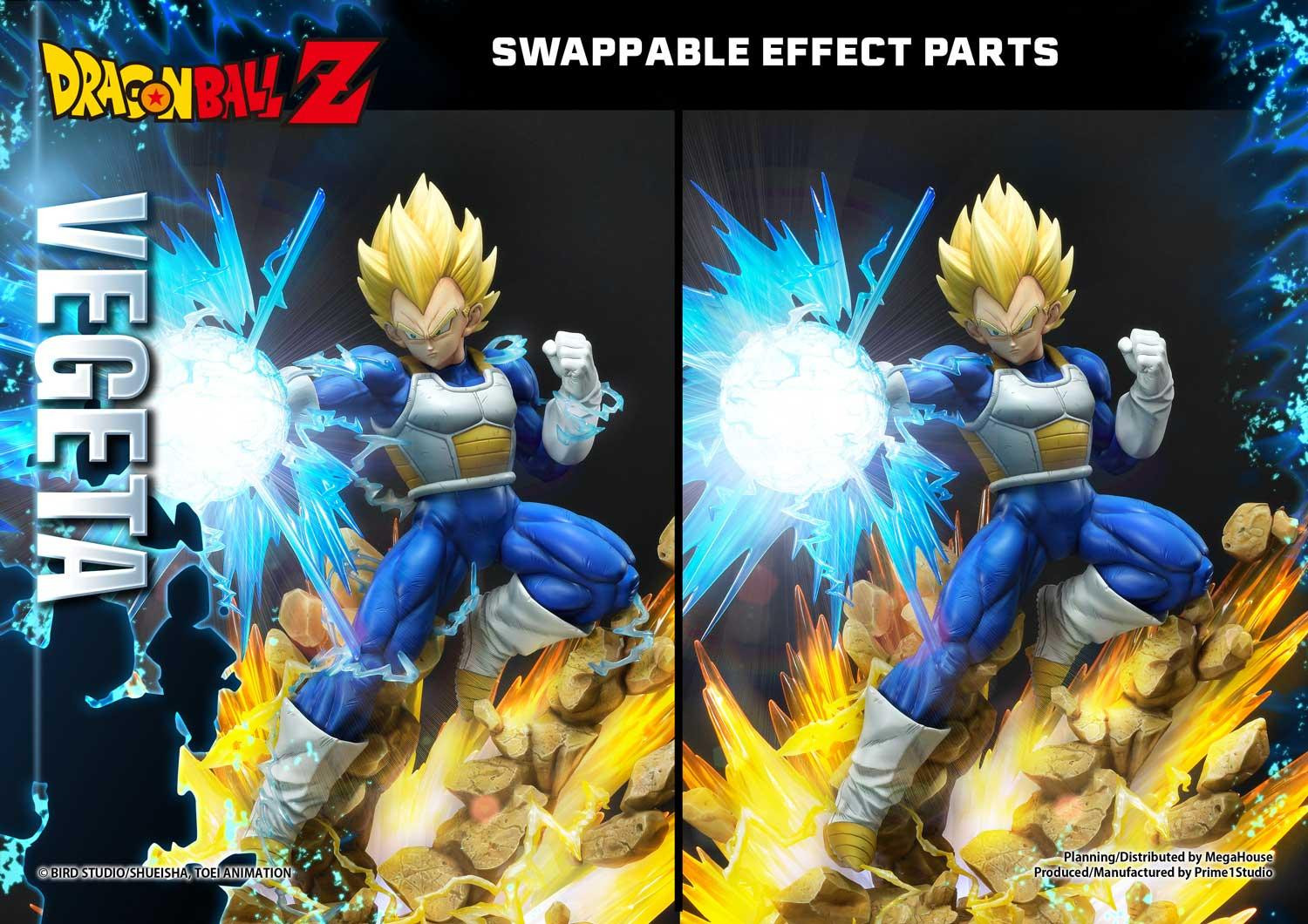 The blue Lightning Effect which entwines on Vegeta‘s body can also be removed. After removing the lightning effect, you can clearly appreciate Vegeta‘s exaggerated muscular figure. 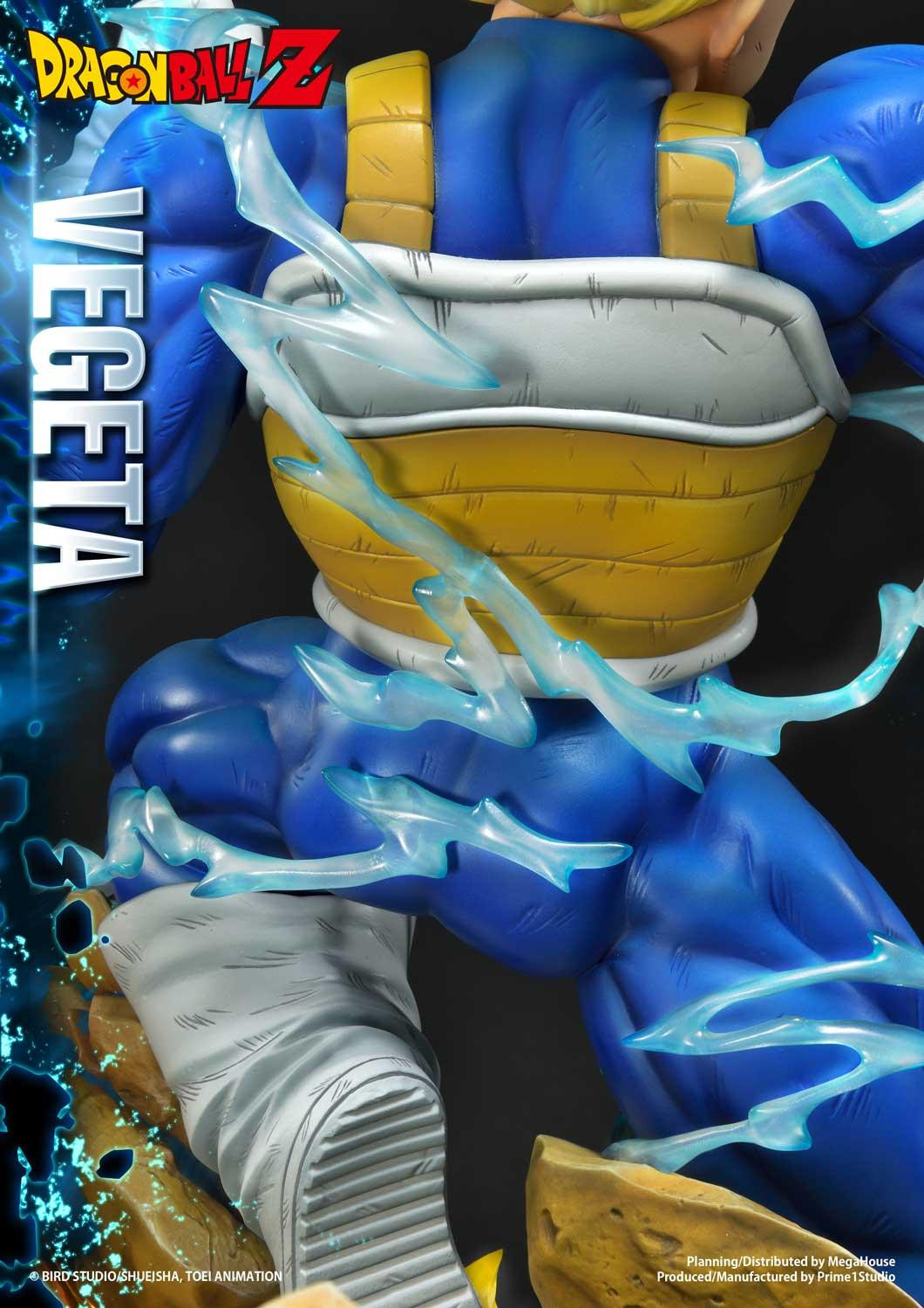 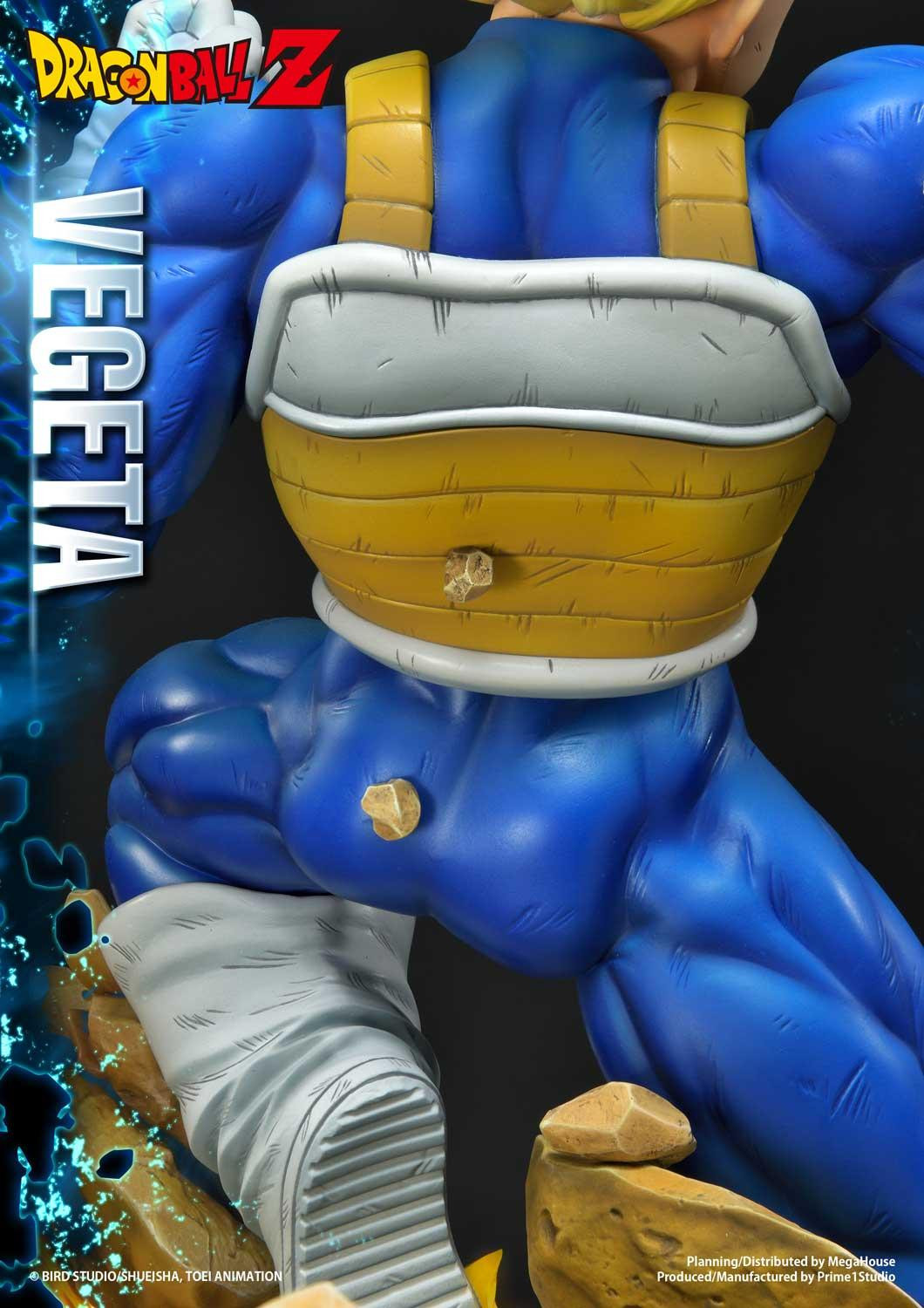 When you remove the lightning effect, you can install the stone parts on the points. It can not only block points, but also has the special effect of energy explosion causing stone splash. The manufacturer’s design is indeed very clever. 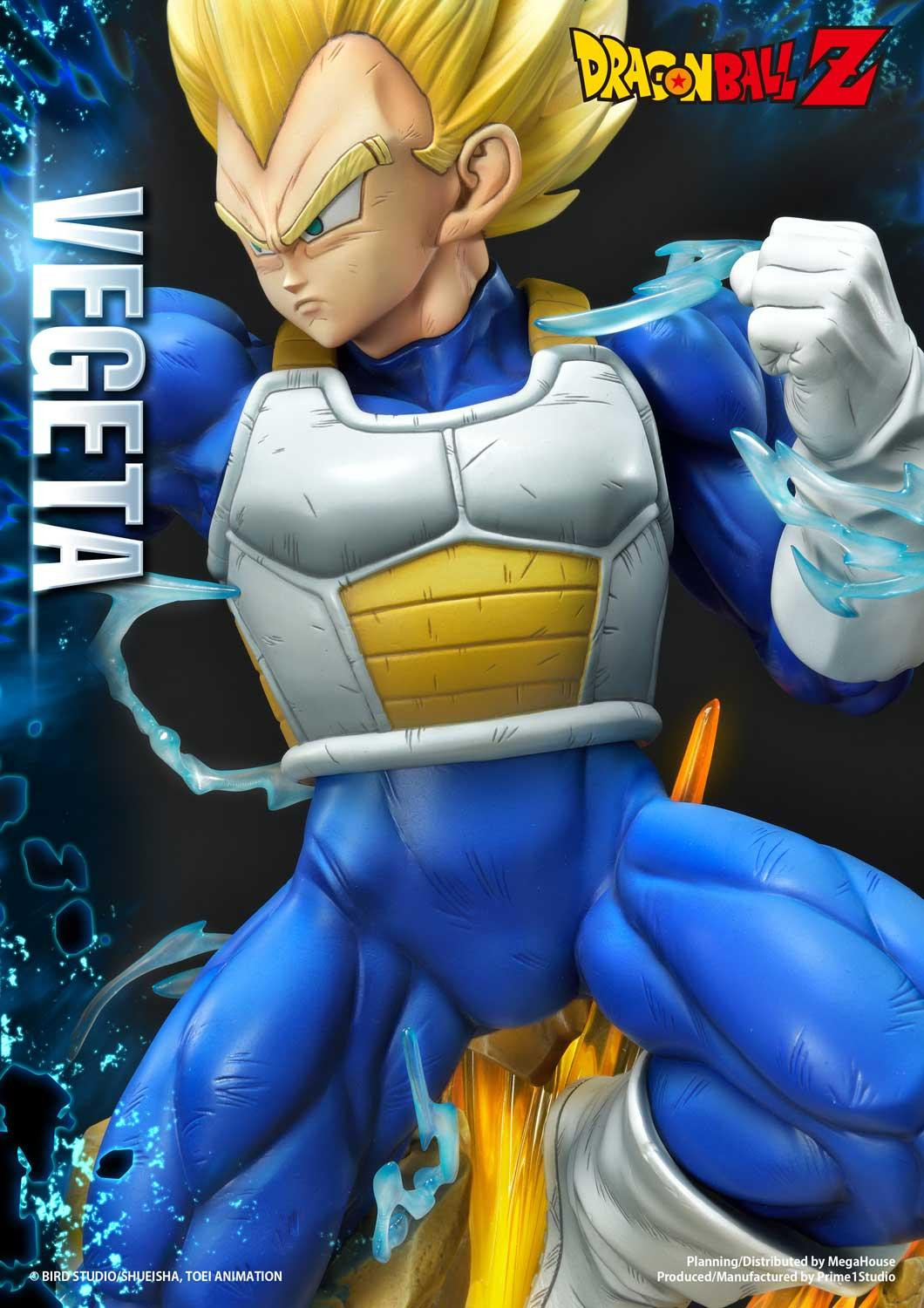 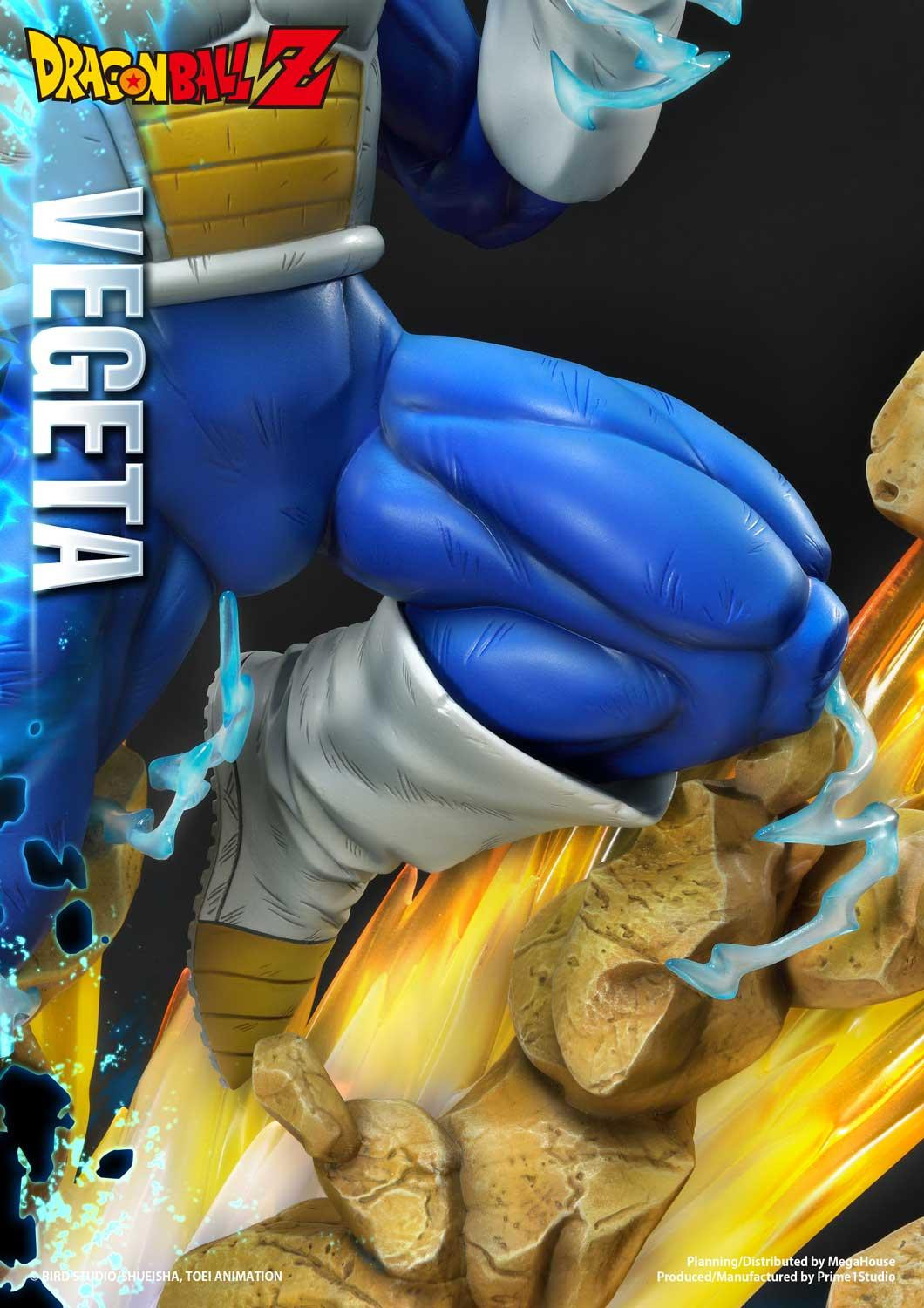 Vegeta is wearing a classic Saiyan battle suit that highlights his muscles! Look at his thigh muscles, which are so strong, show his absolute strength, and fully embody the comic style. Normal people will not have this effect until they die. 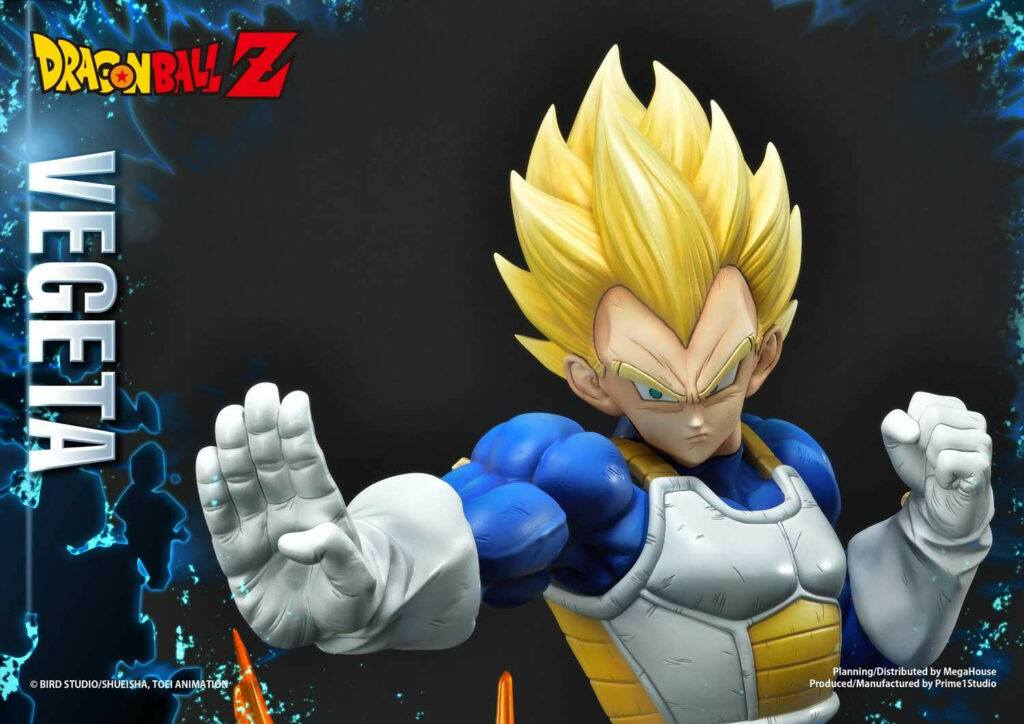 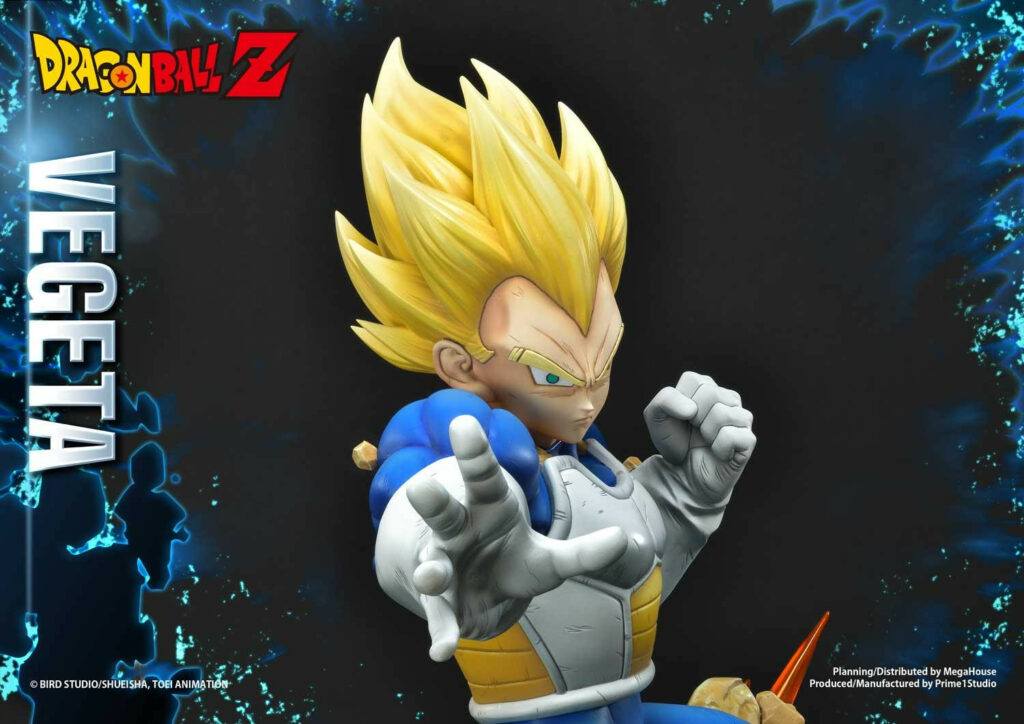 There are totally three interchangeable right-hand gestures, in addition to the “Big Bang Attack” gesture, it also includes Activation Hand and Open Hand. They really increase the playability very much. 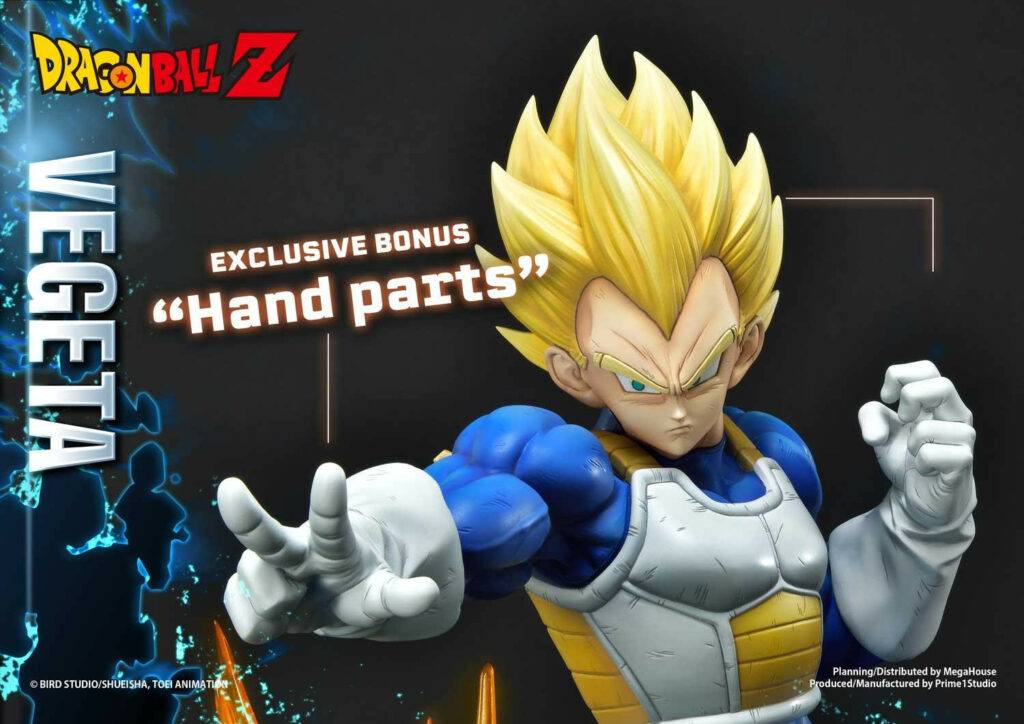 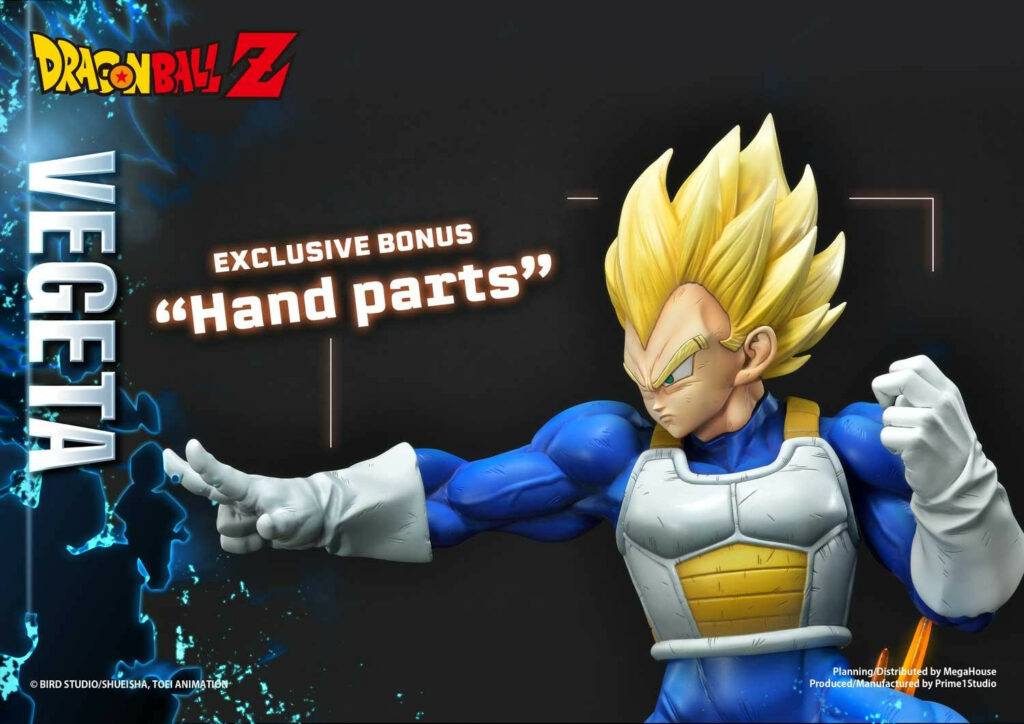 It also includes an interchangeable Exclusive Bonus pair of hands which is Limited Time Offer.  I think you guys should not miss this pair of hands, because it won’t cost you much money and it will give you a lot of fun. 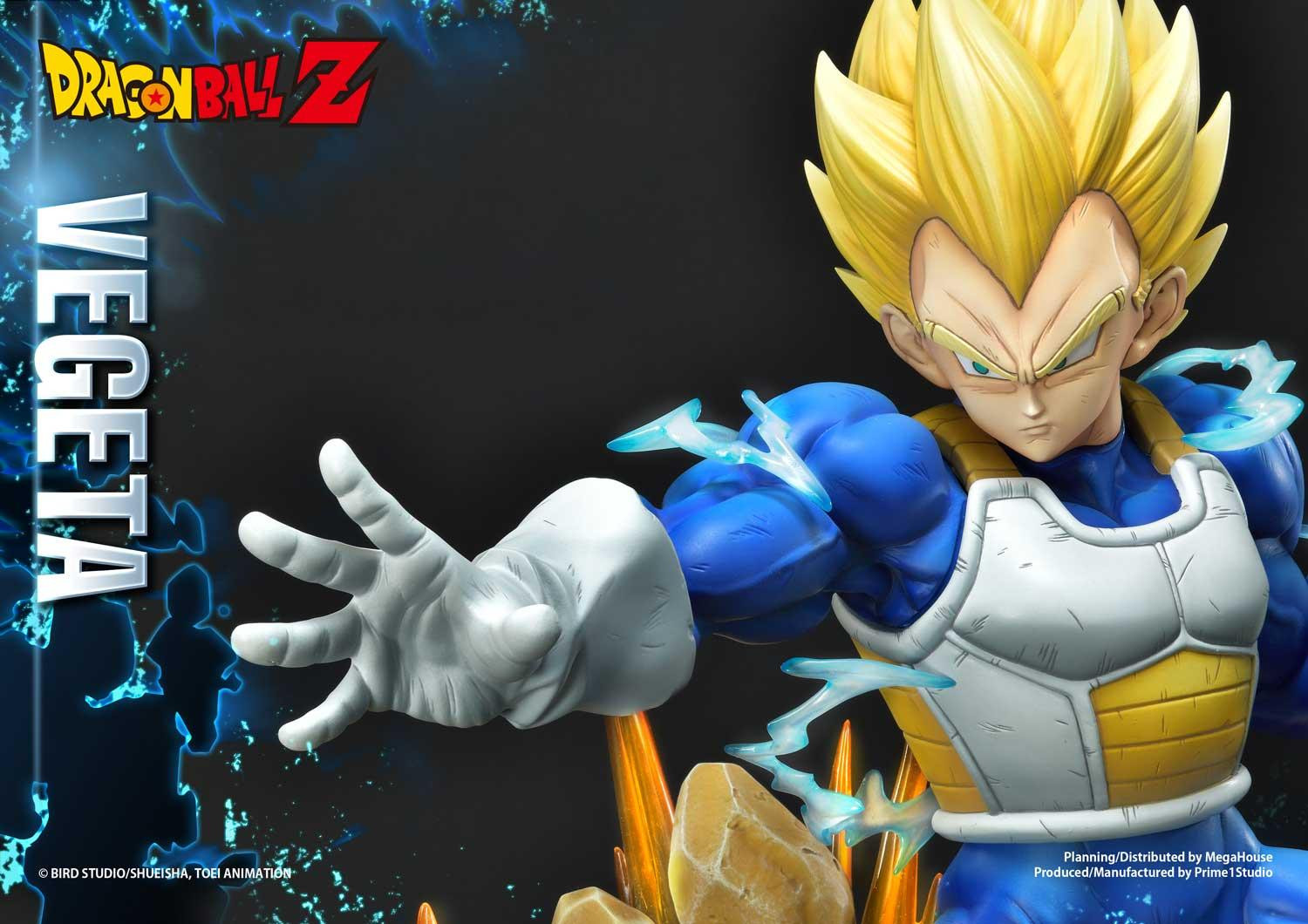 Vegeta’s head sculpt is designed as a Straight Face and an iconic blond of Super Saiyan. The hair has nice lines and shadow painting, and the expression is serious and cold. 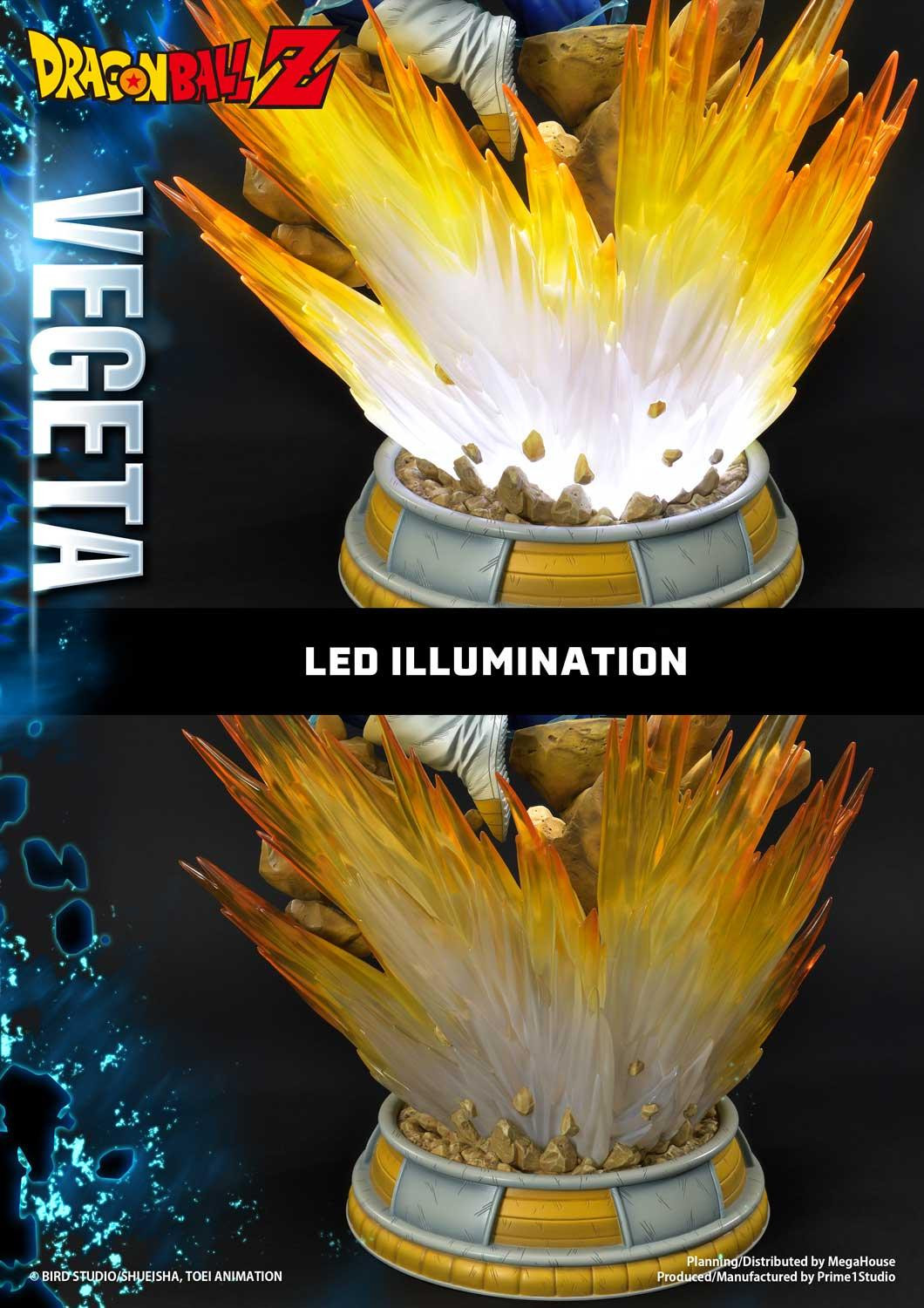 This statue also has a very amazing theme base, the light effect is similar to Goku statue, but the base has been changed from a dragon body to an element of Saiyan spacecraft, the special effect of energy overflowing and bursting also has built-in LED lights, which reflects the powerful aura of Super Saiyan Vegeta after lighting up. 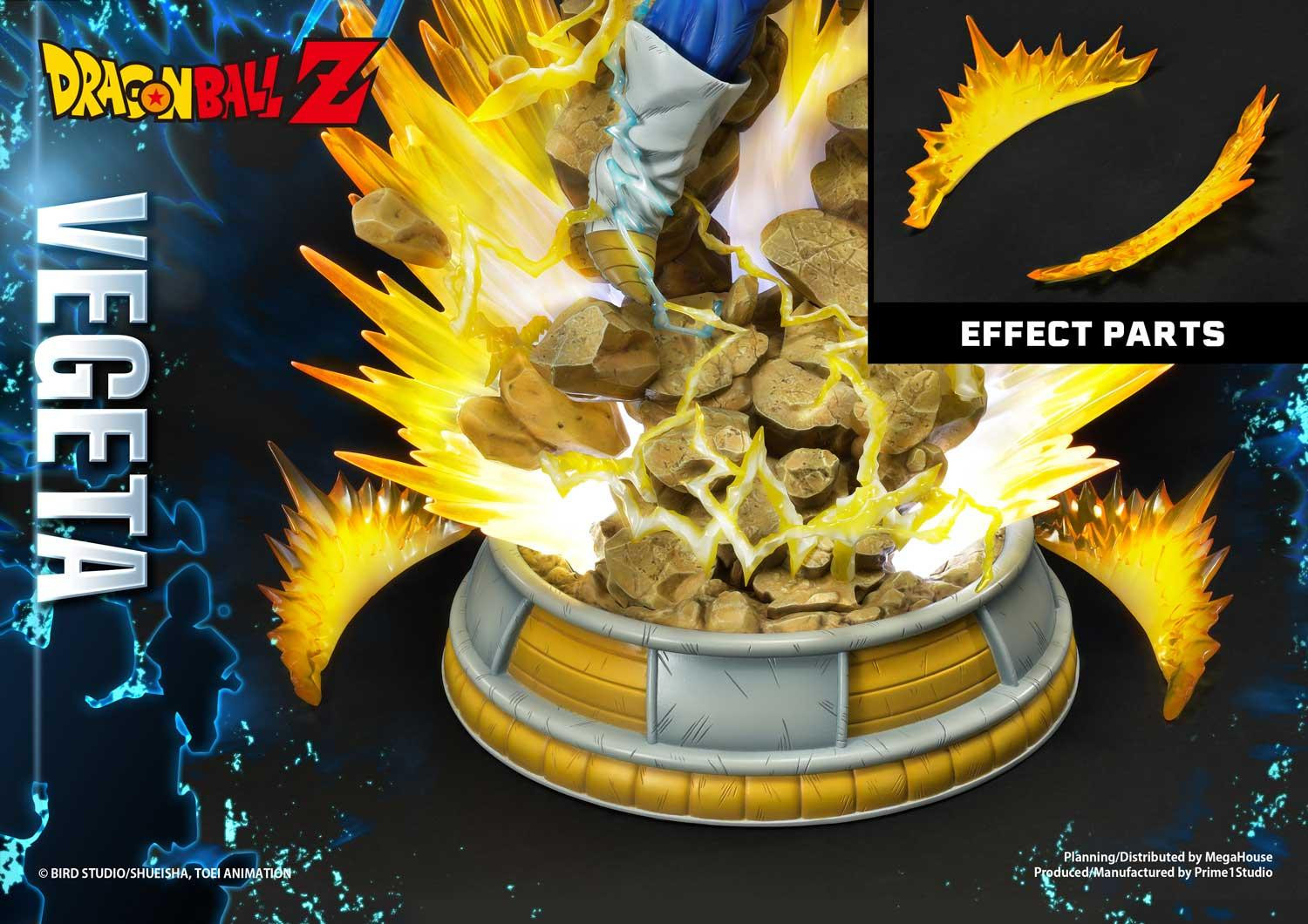 As same as the Goku statue, this base of Vegeta statue is also included with an additional aura special effect on both sides. After placing them, the effect is more awesome, and there is a feeling of energy waves spreading outward. 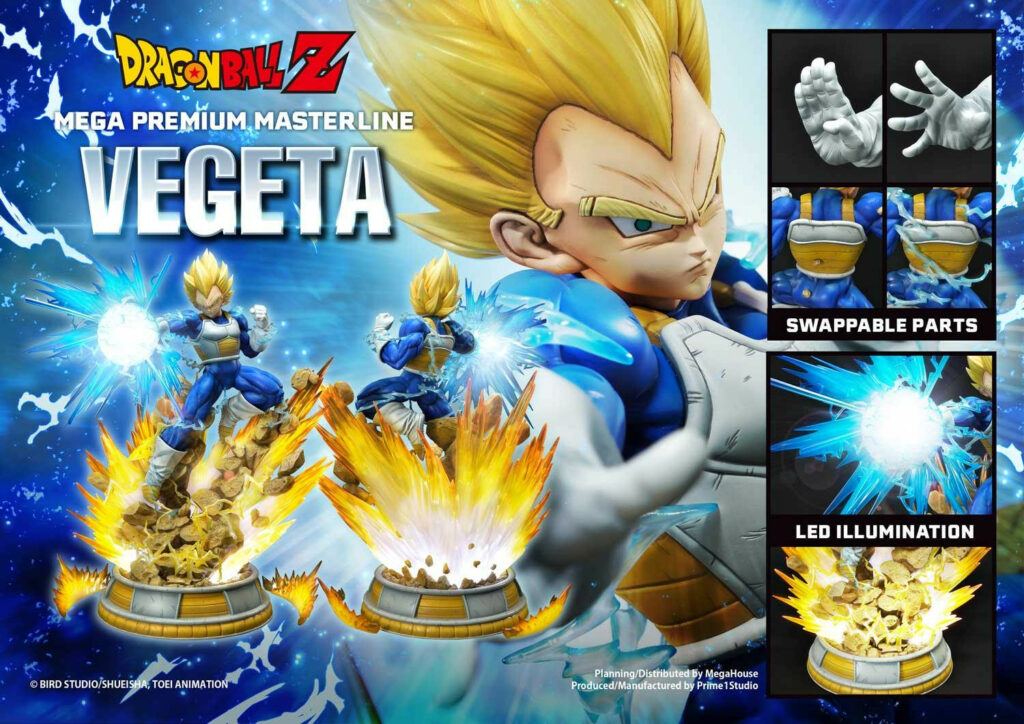 OK! The above are all the accessories of Vegeta statues. I have introduced them one by one. 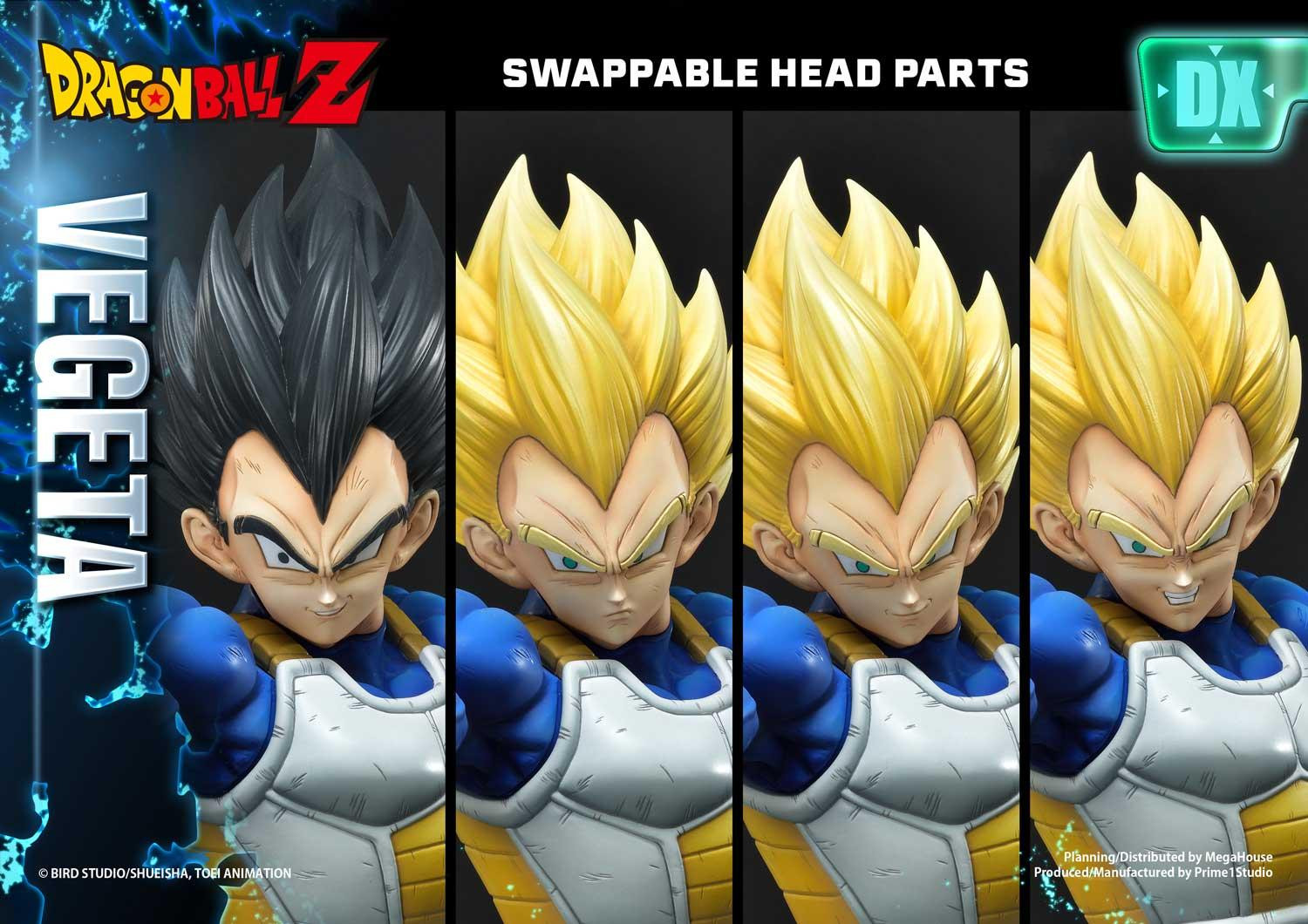 As mentioned before, The Deluxe Version comes with a total of four alternate portraits- Black Hair, Straight Face, Smile and Smirk. 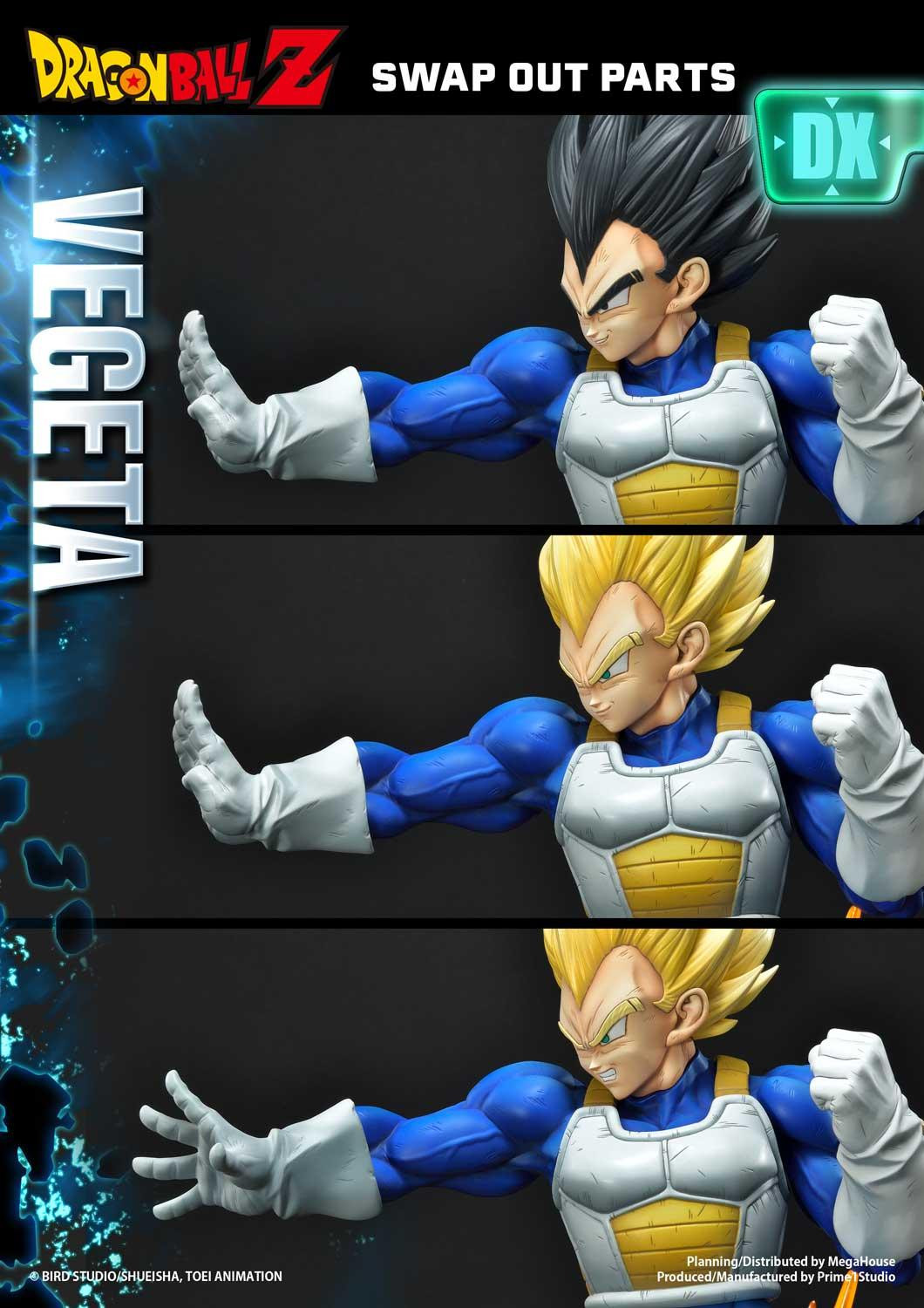 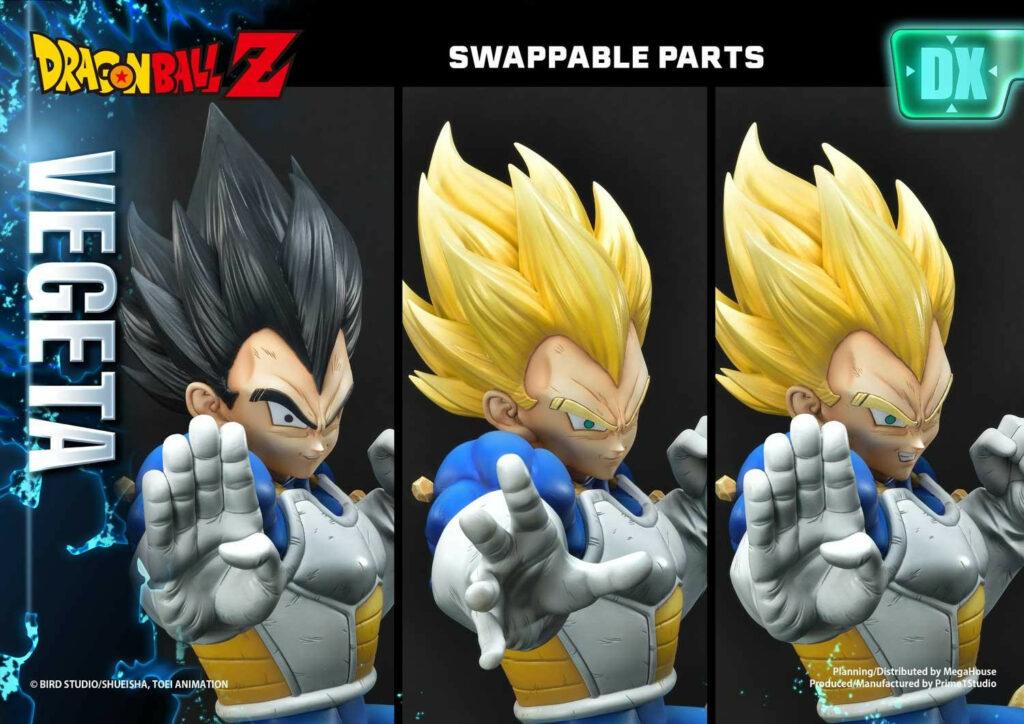 In addition to the “Straight Face” of normal version, the Deluxe Version mainly adds the above three expressions. 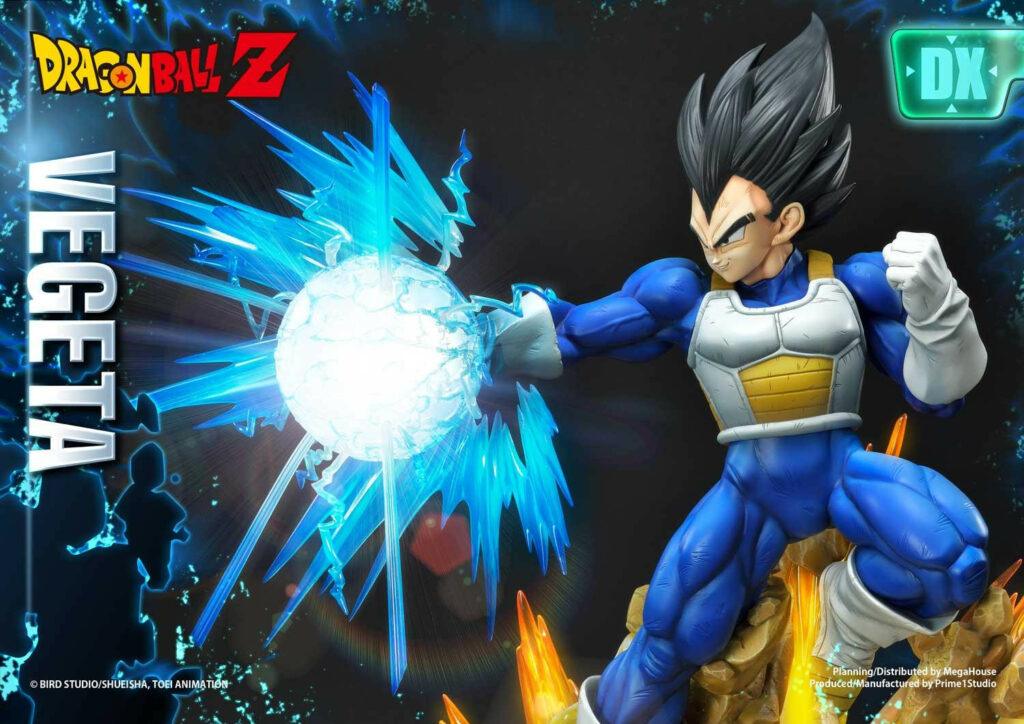 Black-haired Vegeta is definitely an essential classic look. You will see that Vegeta has a contemptuous expression with a smile on the corner of his mouth. 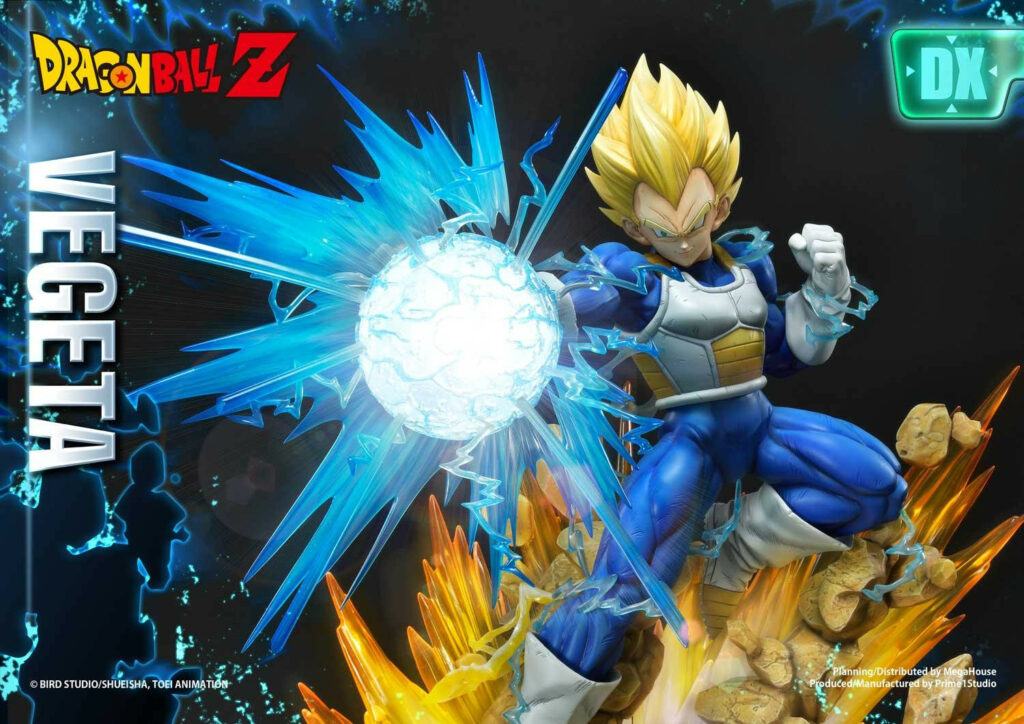 This is a smile expression that reflects strong confidence of Vegeta. 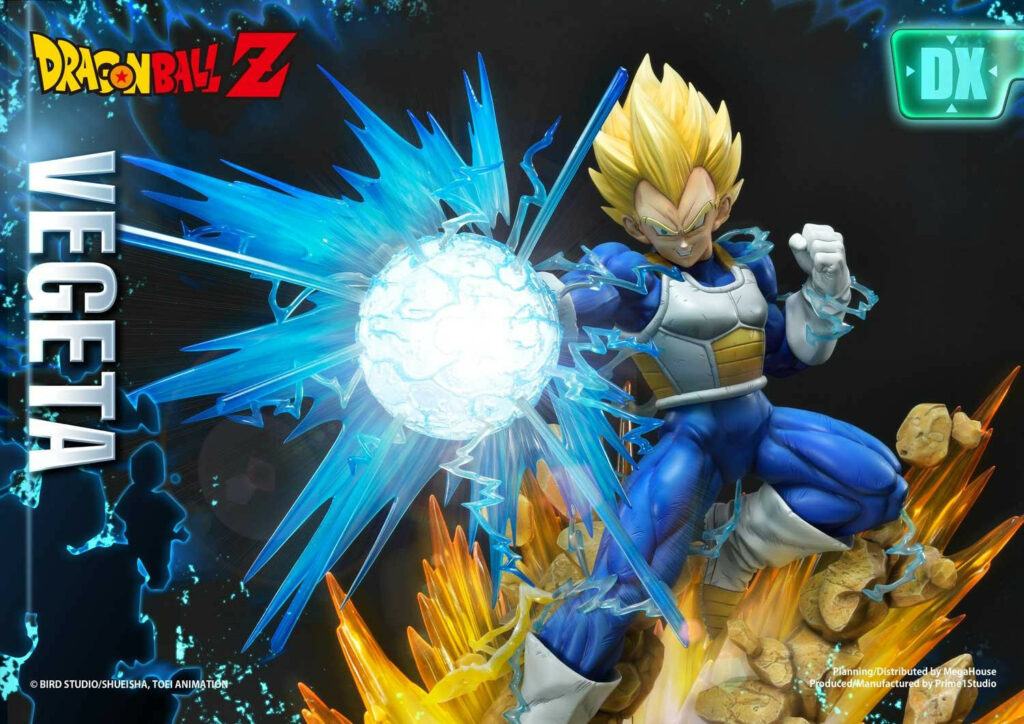 This smirk expression is also good, and it truly reflects Vegeta’s character.

To be honest, The expression of Goku statue is a bit richer than Vegeta statue this time. What’s your opinion? 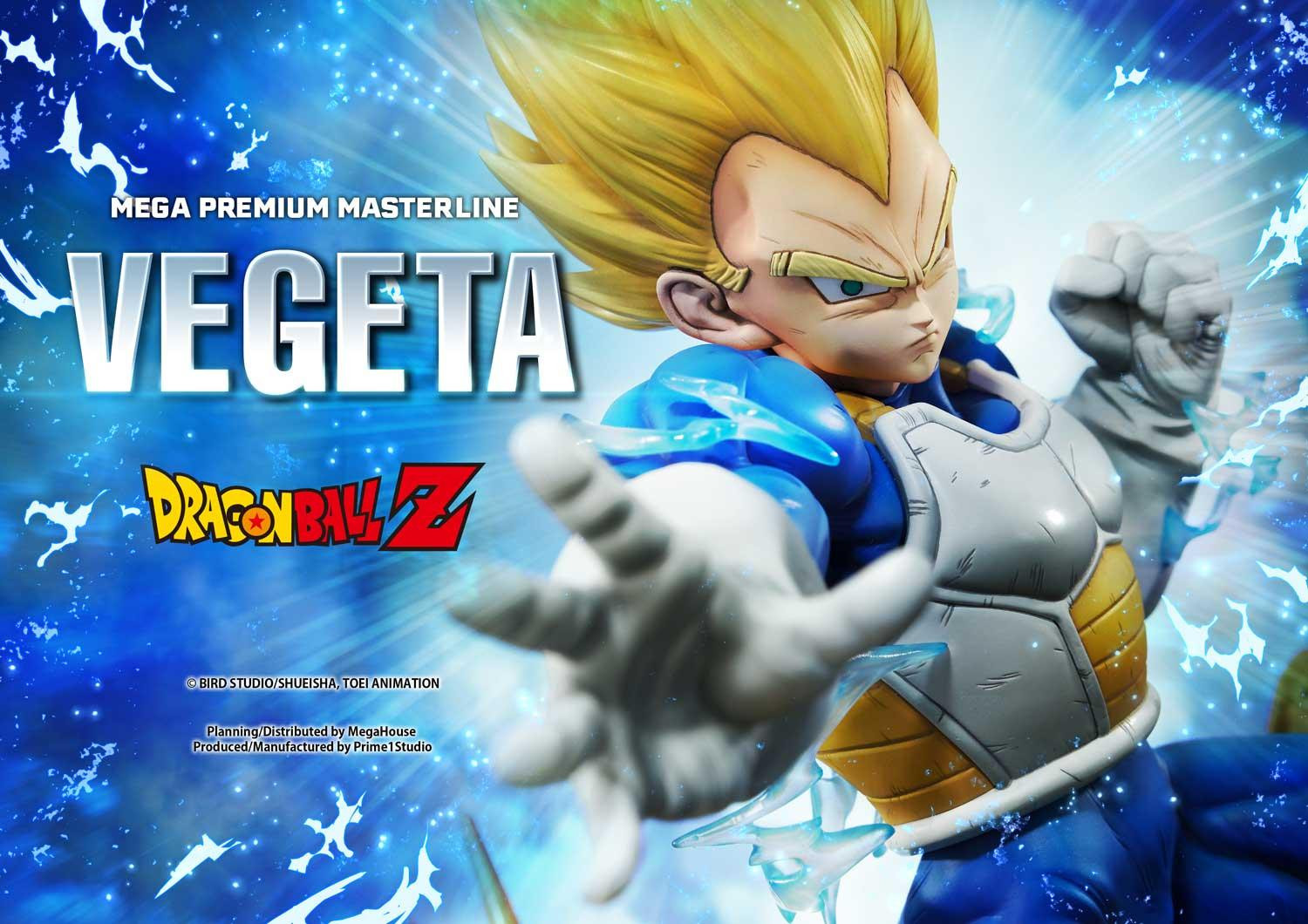 You guys who like Vegeta, please don’t miss this high quality statue!

By the way, you can check out the Review of Goku statue here–Dragon Ball Z Goku Statue