Sideshow and PCS Collectibles have released the Venompool 1:3 Scale Statue, based on the wildly popular playable character from the hit game Marvel Contest of Champions. Really domineering shape and big size of it. 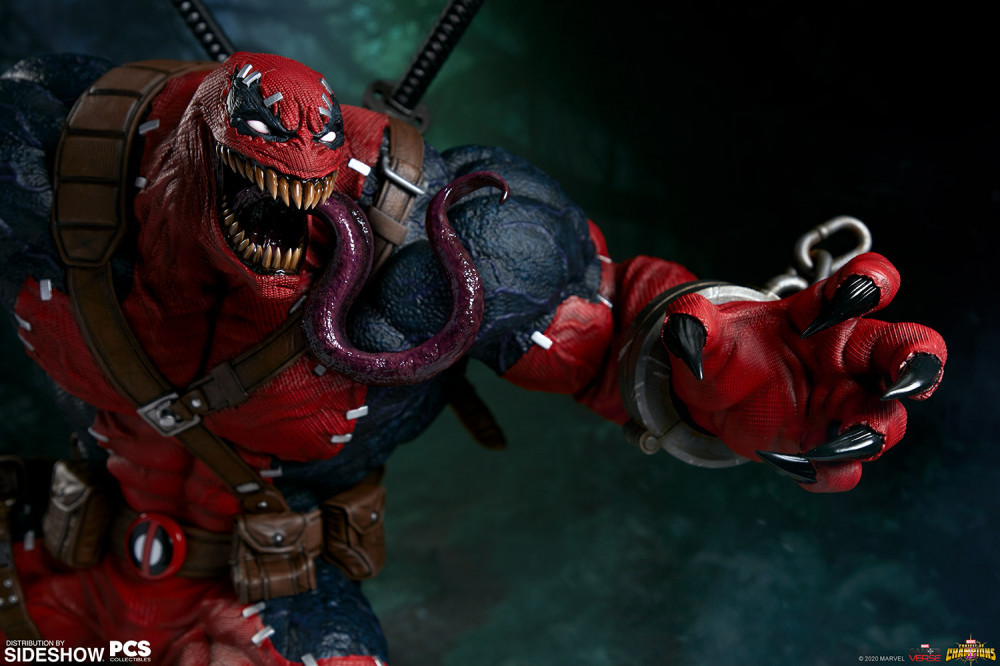 A monstrous mix between the Venom symbiote and Deadpool himself, so the shape will have two characteristics at the same time.

The Venompool 1:3 Scale Statue measures a massive 40” tall and 30” wide on top of the ruins of a Sentinel’s head. Compare to Sideshow Deadpool 6 scale figure, it is really big enough.

Inspired by the in-game Savage Land stage, the former mutant-killing machine is overgrown with moss and mud as Venompool lunges into battle.
With an inspirational design and tensional POSE, it is so domineering.

It reveals well of Venompool‘s muscle shape, we can the muscle lines are very clear. At the same time, the details of the veins stand out also increase the three-dimensional sense of performance.

A highlight of the head sculpt is Venompool showing his expression of gnashing. It is described as vivid and powerful.

Well delicately treated of teeth, successfully let me feel icky by the dirty yellow teeth. I really want to pull out all his teeth, LOL.

The Venompool statue includes two swap-out portraits, one is a closed-mouth grin which shows above, and another is an open-mouth snarl revealing his long tongue.

The tongue is painted very well, reveals the slimy texture, increases the sense of realism.

Venompool‘s black and red costume blends the best elements of both twisted antiheroes. The belt and tactical pouches also make you feel real and textured.

Besides, the details of the hoop chain also are good, including iron rust and cutting marks.

Black nails with a little luster, reveal its sharpness and evil.

There is a pair of wrapped katanas on his back, which belonged to Deadpool before.

The base is designed as the ruins of a Sentinel’s head. It is treated with battle damage.

It also adds the element of moss, increasing it much more real.

If you are a Marvel fan and really like this character, please don’t miss it.